US 27 Southbound Lanes to Open Wednesday

Construction Project Will Continue Until 2025 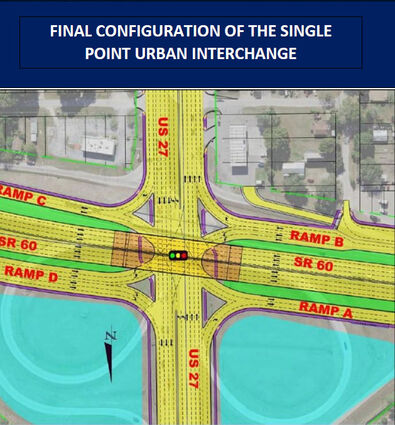 The former Simi-cloverleaf design of the US 27 - SR 60 intersection will become a "single-point urban interchange" controlled by a single traffic signal located beneath the new steel-span bridges. In this image from FDOT, north is located at the bottom.

The construction of a "Single Point Urban Interchange" at the intersection of US 27 and SR 60 continues with another change in the traffic pattern, this time one that may east navigation for area motorists.

According to a statement issued by the Florida Department of Transportation, traffic traveling on US 27 southbound will be shifted to the newly constructed lanes beginning Wednesday. The change is a welcome improvement for drivers who have been navigating through a maze of barrels and barriers to pass through the busy intersection. An apparent recent change in the timing of temporary traffic signals has also simplified the process.

The massive $45 million project to replace the obsolete bridge over US 27 in Lake Wales will continue as the road-bed of the new east-bound span in completed in the near future, allowing full use of the new six-lane bridge. Project completion is expected to occur by early 2025.

Planned improvements include widening both roadways from four lanes to six 11-foot lanes, with bicycle lanes, curb and gutter, a closed drainage system, and six-foot sidewalks.

Crews have constructed an urban frontage road in the southwest quadrant along SR 60 for access to local businesses. The project also includes construction of a noise wall along SR 60 from South Miami Street to west of Sharp Street, resurfacing Central Avenue from west of US 27 to Miami Street, installing signals, lighting, signage and pavement markings on US 27 and SR 60.

A final phase of the project will include installation of landscaping according to a plan approved with the help of City of Lake Wales staff including Special Projects Coordinator Michael Manning and Horticulturist Lester Gulledge.

Daytime and nighttime lane closures will continue to occur on US 27 and SR 60 during construction.