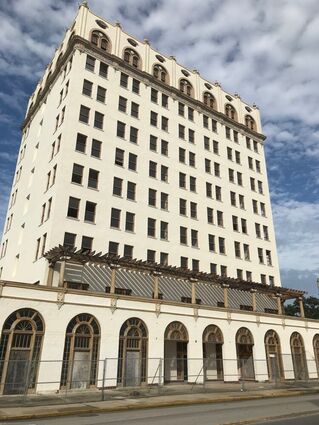 The historic Walesbilt Hotel, built in 1926 with the support of several Hollywood stars, has been in limbo for more than 25 years as the title has changed hands. The battle over ownership in on-going.

A quick end to a lawsuit over title to the Walesbilt Hotel was raised as a possibility during a meeting of the Lake Wales Community Redevelopment Agency on Tuesday.

"There is a good chance that the city will once again have title to the hotel, and I think we should notify everybody out there...that there may come a time when that hotel will be on the market," Chairman Robin Gibson told the commissioners.

The city has been locked in a legal battle with Walesbilt LLC since February in an attempt to recover title to the former city property. The city had deeded the hotel to Walesbilt LLC ten years ago after ranking the firm as qualified, but city frustration continued to mount after slow progress on promised renovations.

In December 2021 the city commission and staff began to discuss a February statutory deadline known as "repose" which would be their final opportunity to act to regain the property.

At about the same time Walesbilt LLC came forward with a proposal, backed by industry professionals, that would have restored the hotel as a luxury property under a major hotel chain.

Frantic negotiations failed to resolve the city's concerns, and a lawsuit was filed. Both the City of Lake Wales and the Lake Wales CRA are parties to the legal action.

A hearing on a motion for summary judgement was heard by the court on Tuesday, a process Gibson equated with a "mini-trial," indicating that it could lead a judge to determine that the matter was so plain that no trial is required.

Hotel owners Walesbilt LLC filed the motion as a part of their defense against the city lawsuit seeking to set aside the original contract. Gibson called it "a strategic step undertaken by a litigant."

"To be honest about it, that motion is preposterous," Gibson said. At the end of the board's regular meeting, he took time to describe the process and the arguments being made by attorneys on both sides.

Gibson expressed his opinion that the contract was based upon "fraud in the inducement," saying that several claims made by Walesbilt president Ray Brown were false, making the contract invalid. That, he suggested, should lead to the courts setting the clock back and returning the title to the City of Lake Wales.

Gibson is eager to offer the property to new developers, who may partner with the city to return the property to productivity. That would be done through the issuance of a new Request for Proposals (RFP) that would require applicants to prove their ability to complete the project.

"I want everybody on the same playing field, everybody to have the same chance," Gibson said of the possibility of the new development opportunity. "So, people, step up. I don't want to hear anyone say 'well, you never told us.' Stay in touch, folks, because this could very well happen."