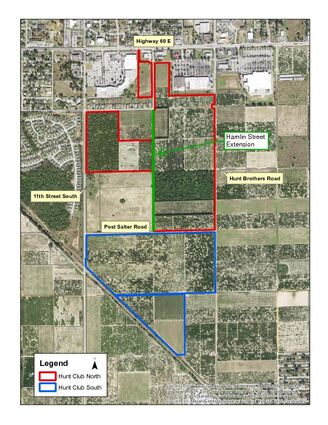 The two-phase development of Hunt Club includes "north" (in red) and "south" (in blue) parcels that will eventually contain 1.137 units, according to plans approved by Lake Wales. The project will include 339 two-story townhomes lying south of the Winn Dixie "East Lake Plaza. Hamlin Street, depicted in green, is the primary north-south street in the development. The east-west alignment of Post Salter Road will connect that street with South 11th Street between the two phases.

An extension of Hamlin Street will be constructed by Hunt Club manager and developer David A. Waronker under an agreement that will see up to $1,597,793.45 credited against the "Multi-Modal Transportation Impact Fees" assessed by the city.

Under an agreement approved recently by the Lake Wales City Commission, the street will include underground storm drains, curbs, sidewalks, and street lighting. The city's development codes also call for the planting of street trees in addition to those required on individual homesites.

Hunt Club will also be required to improve Post Salter Road, a county road, to the same urban standards. County standards would otherwise allow for the creation of open swales, and would not require the other improvements specified by the city. Because it is a county road, that project will be constructed solely at the expense of the developer.

City ordinances require new developments to pay significant impact fees to avoid passing costs back to existing taxpayers. The city's newest fee is a "mobility fee," which allows for much greater flexibility in its use than traditional transportation impact fees.

Based on current figures, the project should generate a total of $2,172,628.62 in impact fees, according to city staff. After subtracting the credit for the Hamlin Street project, the City will still receive $574,635.17 in fees from this project.

Waronker, of Orlando, is behind several different new residential projects on the city's south and east sides.