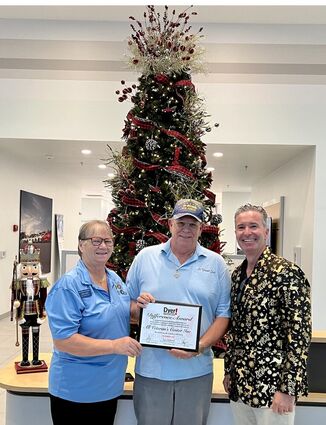 Feeding veterans and their families and aiding in preventing suicides is a pretty significant contribution to Polk County residents, and the Dyer family has taken the time to recognize that effort.

The nonprofit organization which assists veterans, their families, and their communities also helped find safe housing for 35 families who were homeless, too. And most importantly of all, the volunteers at the All Veterans Center were able to prevent eight veterans from committing suicide, something which is far too common a tragic occurrence among United States Veterans. According to the Veterans Administration, 20 veterans a day commit suicide, male and female veterans who have faithfully and honorably served their country. This equates to one veteran suicide every 80 minutes, everyday 365 days a year.

Founded in 2017, the All Veterans Center is on track to feed nearly 70,000 during the coming year as the organization has grown from distributing food to only veterans and their families to all families in need in the community. The Dyer Difference Award in December honors the dedication and service of All Veterans Center to the veterans and the entire community it serves.

Each month, members of the Dyer family and Dyer Kia and Dyer Chevrolet team meet to review the applications which have been submitted and select one non-profit organization to receive that month's recognition and $3,000 award. For the members of the Dyer team, it's all about helping to make a positive difference in the community. For the recipients, it's an acknowledgement of their tireless efforts to do the same and a much-needed financial boost to help further their missions.

If you'd like to nominate a non-profit organization from Polk County for the Dyer Difference Award, please visit http://www.dyerdifference.org.