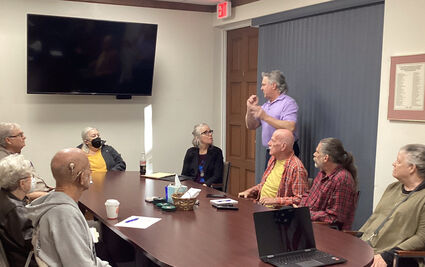 A group of about a dozen citizens attended a Wednesday morning meeting at the Lake Wales Area Chamber of Commerce to raise questions and seek answers about a manufacturing facility proposed for an industrial site on Hunt Brothers Road.

Advanced Drainage Systems (ADS) has proposed the plant, which will be located adjacent to the former Hunt Brothers citrus packing plant. The manufacturer is expected to hire scores of employees, including 56 for its primary shift. The plant will operate continuously.

Lake Wales Chamber Executive Director Skip Alford spent nearly two hours with the group, fielding questions about the project planning, which he said had been "well underway" since before he was hired to lead the organization nearly 18 months ago.

Asked why even city commissioners seemed unaware of the project until a story appeared on LakeWalesNews.net, Alford explained that such business recruitment activities are normally private.

Alford's duties include economic development, a function preformed under a contract with the City of Lake Wales, making him privy to such information.

Most of the issues raised by those in attendance related to the potential for any emissions or noises, and the location of the plant relative to proposed residential development. Alford assured the group that ADS has an excellent record as a clean industry.

The closest proposed residential development is Hunt Club South, which will include townhomes. They will be separated from the plant by buffers on both sides of an existing railroad right-of-way.

Catherine Price told the group that her only concern was the location. The site of the new plant was zoned for industrial use for some 15 years. A "Special Exception" is being requested to allow the plant to store finished product outdoors on the 96-acre site, rather than inside.

Resident Tom Daugherty told the group that the plant is "not only a valuable project, we need ten more of them."

Alford said that having the facility inside the city limits is important, as "we would rather have control of our own destiny."

The attraction of major employers to an area is often replete with various "inducements" that may include deferred or reduced taxes and waivers of impact fees. Alford said he is unaware of any in the case of ADS.