Polk #3 in Florida for Lynchings 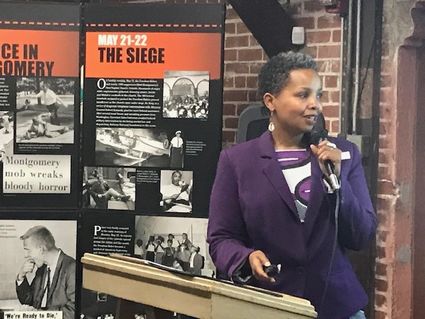 All Photos by Chevon Baccus

While many Black History lectures celebrate the accomplishments of African Americans, Hobbs focuses on the dark past she wants no one to forget. More than 75 people listened with rapt attention to Hobbs' description of the migration of African Americans, the exploitation of Black labor and the "spectacle lynchings" that drew large crowds.

Between 1882 and 1951, Hobbs' research identified 4,732 lynchings in the U.S. - 83 percent of them in the South; 73 percent of the victims were black. She said Florida was the deadliest place in the nation, with Polk County third in Florida and twenty-first in the nation in the degree of lynchings.

"Before slaves were freed their bodies were too valuable as labor," Hobbs said. "Violence and murder were used to keep them in their place."

Hobbs is an associate professor of history and coordinator of African American studies at Valdosta State University. Her Lake Wales presentation was sponsored by the Florida Humanities Council as part of the Museum's ongoing speaker series. The next program will be 6-8 p.m. Thursday, March 21, with Peggy McDonald speaking about Florida's Female Pioneers as part of Women's History Month.

Another part of the Museum's focus on Black History Month is the current "Freedom Riders" exhibit, which will run through March 20. It focuses small interracial groups that traveled together in 1961, sitting together on buses and trains and demanding unrestricted access to terminal restaurants and waiting rooms. They faced bitter racism, mob violence and imprisonment with courage and sacrifice.

Blood on the leaves

Blood at the root

Pastoral scene of the gallant South

The bulging eyes and the twisted mouth

The scent of magnolia sweet and fresh

Then the sudden smell of burning flesh

Here is a fruit for the crows to pluck

For the rain to gather

For the wind to suck

For the sun to rot

For the tree to drop

Here is a strange and bitter crop