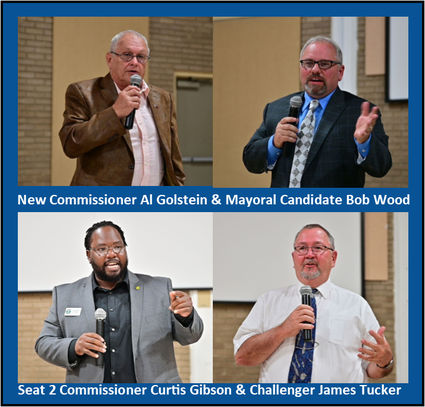 Candidates for Lake Wales mayor and city commission shared common beliefs about the need for more citizen involvement and transparency in city government at a forum Thursday, March 14 sponsored by the Lake Wales Chapter of the American Association of University Women. Only about 25 people came out to the James P. Austin Community Center to listen and ask questions.

Incumbent Mayor Eugene Fultz did not attend, but sent some prepared comments. He is on the Board of the Ridge League of Cities and he chose their board meeting and dinner over the forum. Fultz's opponent, Bob Woods, took several jabs at the mayor's decision to skip the forum.

Incoming City Commissioner Al Goldstein, who was elected without opposition when incumbent Tonya Stewart failed to qualify to run, made some very strong statements and expressed his opposition to several projects the City currently has on the drawing board, including the North Library, that would be located near Lake Ashton where Goldstein lives.

All of the candidates expressed concerns about blighted conditions in the northwest section of the City; they also talked about the need to return to an open bidding process for construction projects. Since December 2016 the City has used Semco Construction in Bartow to manage most of its projects, without requiring open bidding for individual projects.

Also at the forum, City Clerk Jennifer Nanek explained the proposed ballot question calling for a Charter change that would extend commission terms from two years to three. Nanek said three-year terms allow a commissioner more time to learn about how city government functions so they can be better informed when voting on goals and policies. She said three-year terms provide for more stability in city government since the staggered terms will ensure a majority of commissioners are not on the ballot at the same time.

"A new majority could still be brought to office, but it would occur over two elections, thereby giving the electorate a better opportunity to evaluate drastic change," Nanek explained.

She noted three years also allow a commissioner to go through the entire budget cycle, planning it, implementing it and its audit. It also will allow voters a better opportunity to gauge whether or not a commissioner is effective and/or share the same goals.

AAUW Co-President Jacque Peppel opened the forum and talked about the organization's commitment to helping inform voters. Member Jessica Bray moderated the program, which included 3-minute opening and 1-minute closing remarks by each candidate plus a series of five questions provided in advance. Additional questions came from attendees.

Here is a summary of key points from each of the candidates:

The only candidate who outlined very specific proposals for change is Bob Wood, who is challenging three-term Mayor Eugene Fultz. Wood said he wants to revisit the city's fire fee to make it progressive like the new stormwater assessment, where the charge takes into consideration the actual size of the dwelling. He said it is inequitable for a person with a 4,500-square-foot home to pay the same annual fee as someone with a 600-square-foot home. Wood also called for using tax credits to attract new businesses, waiving 100 percent the first year and then dropping the credit 10 percent per year. "Tax credits work, it helps bring business in," Wood said. He said he wants to keep the city's property tax rate down and possibly lower it to the "roll-back rate," that would generate the same revenue as the current year. Wood said he wants the city to use code enforcement and inspections to push the Walesbilt Hotel restoration forward and set "hard deadlines." "Let's bring that fence down and get that hotel going," he said. Wood said the City needs to take a look at the police and fire pension funds, possibly refinance the debt and stop the practice of paying the fund administrator based upon the total value instead of return on investment. He chided the city for moving slowly on road construction, saying it will cost taxpayers more money because of the steep increase in the price of oil, a product used in paving roads. He said his three priorities are oversight, accountability and development.

Fultz did not attend the forum but sent some prepared remarks, which were read by the moderator. They focused on the City's successes and challenges during his tenure and his involvement with various community organizations. He said he has been holding monthly "Chat and Chews" with the Mayor and would like each commissioner to host a similar forum at least quarterly in their own districts. He pointed out improvements to City streets and the implementation of a stormwater assessment, which will help fund future improvements to drainage and water quality. He said he is looking forward to the recommendations of urban planner Dover Kohl to help the tie-in between downtown and the northwest business district.

Gibson said he believes the City has made progress during his two years on the commission, especially in the areas of recreation, parks, roads and utilities. He pointed out that the City is in good shape financially and has grown its reserve fund. Gibson said he will support reducing the property tax rate for the next budget year. He said he will keep an eye on the debt and serve as a watchdog. He opposes the city manager's proposal to build a $700,000 maintenance facility and he is not convinced of the need for a $500,000 North Library. "I will keep asking questions, especially about costly projects that are staff-driven rather than citizen priorities." Gibson said he supports the city's partnership with the Lake Wales Area Chamber of Commerce & Economic Development Commission and he believes the City has become more business friendly. He pointed out recent openings of Aldi's and Wawa and the construction of Love's Truck Stop on south U.S. 27, which will have three food establishments and employ 50 people. Gibson agreed that downtown and the northwest business community have been neglected, but expressed optimism that the urban planning firm Dover Kohl will develop a revitalization plan with citizen input that will be good for at least 20 years. Gibson pointed out he just returned from Washington, DC, where he served on the National League of Cities economic and community development committee and talked with members of Congress about the need to support affordable housing, public transportation and Smart Cities technology. "I would like to continue serving Lake Wales, the community I love"

Tucker said his retirement after 19 years working at Wal-Mart gives him the time to devote to being a city commissioner. "I'm not a politician. I'm a regular person just like 90 percent of the town." He said he would talk to or meet with any citizens and give out his phone and email. Tucker said he had been visiting local businesses, downtown and in the northwest section, where he said Lincoln Avenue needs to be cleaned up and "there are some pretty bad areas. They want it to be something they can be proud of." He said the City needs to apply more money to downtown because, "you wouldn't want to build a business in an ugly area." He also said "we don't need high end businesses that people can't afford to shop in." Pointing out he has been a Little League umpire and a youth football coach, Tucker said he believes City recreation facilities are underutilized, particularly in the northwest section. Tucker said the City should be building a fund to prepare for climate change and should consider using solar to power city buildings. He said rather than hire a consulting firm for building inspections he would like to train local "home grown" people for the jobs. He called for more communications with citizens, saying people won't be as upset about taxes if they understand the need. He said the City didn't do enough to get the word out about the new stormwater fee. Tucker said he was born in Lake Wales and that "We need to make this a place where our kids can grow up and prosper and have the good life we had growing up here."

Goldstein said he plans to start holding public forums every month or so to get citizen input. "Before you can be a good leader you have to be a good follower," he said. "We want to make this city a great city for our families and future." Goldstein said he wants to see stronger code enforcement to tear down derelict buildings: "We don't need drug houses at night in our neighborhoods." He said he would like to work with Habitat for Humanity and veterans groups to build affordable housing, possibly on lots where condemned homes once stood. He said the City needs to support restoration of the Walesbilt Hotel, not work against it. Goldstein said he would like to look at salaries for police and firefighters to make them more competitive so the City can retain and attract good people. He said the City also needs to look at the police and fire pension fund and consider refinancing or possibly asking for state help. Regarding climate change, Goldstein said the City should start using natural gas to fuel its vehicles. He said the City needs to look at how to tie public transportation into the Sunrail system that will run between Orlando and Tampa, and look for ways to bring people into Lake Wales. Goldstein said he wants the City Commissioners to be "leaders and not rubber stamps for the city manager." He said he appreciated being elected without opposition, but "I promise not to disappoint you. I may get some of you mad at me but I promise not to disappoint you."