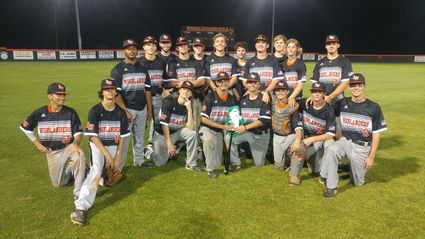 The final score of 6-2 appears closer than it was with the Highlanders maintaining control over their opponent from the onset. At the top of the first inning the Wildcats lead-off hitter ran out an infield single to start the game with a hit for the Wildcats, but first baseman #7 Tommy Ricketts handled the pick-off throw from starting pitcher #16 Clint Lerch, and tagged the runner out. One down.

Somehow Lake Wales overcame two errors in the first frame to escape without having given up a run. The team surely is aware that Coach Bridges preaches that errors, or lack of them, is the key to success. They righted the ship and got down to doing what they do best: playing together and having fun.

In the second Ricketts, a junior, led off with a single to right and sophomore second baseman #8 Clay Jacobs went to second on an error. That left men on second and third, no outs. Outfielder #21 Blake Bradley lasered a single down the middle on an 0-2 pitch to score both runners. Lake Wales was up 2-0 after two.

On defense, the right-handed Lerch brought his A-game to the mound and by keeping the ball low and in the strike zone there were few free passes to first base. The majority of the game was spent fielding and handling balls in the infield. Hardee smashed a few extra base hits, but they were few and far between, but no homers for the visiting Wildcats.

In the top of the fourth a throwing error cost the Highlanders a run when Ricketts was pulled off the base by a high throw, and the Wildcats were finally on the scoreboard.

In the bottom of the fourth #2 Abdiel Flores ripped a towering shot over the right center fence to provide a cushion and a 3-1 lead over the handcuffed Hardee Wildcats who did not bring their bats or their normally tough defense to the fray. Always playing catch-up they tried too hard and their frustration was palpable.

In the fifth inning Highlanders sophomore starting catcher #25 Shalor O'Bryant led off with a hard-earned walk, and senior center fielder #9 Ben Gilbert's triple advanced O'Bryant to score another run padding their lead. After a few more hits Maxpreps Player of the Game Flores hit a deep sacrifice fly to put Lake Wales up, 5-1. 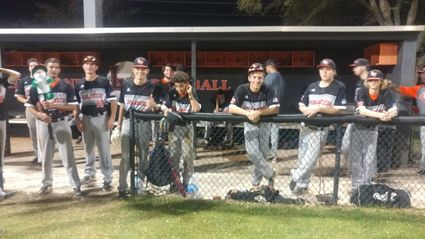 In the final frame Lerch was relieved by closing pitcher #5 Lefty Landen Atkins who finished out the game without allowing a run and putting a victory in the books and in the win column leading the Highlanders to a respectable 5-3 start to their season.

Lake Wales Highlanders score 6 in the top of the first and hold on to win 13-9 at Lake Region Thunder, Tues. Mar. 12. #8 Clay Jacobs was awarded the Maxpreps Player of the Game.