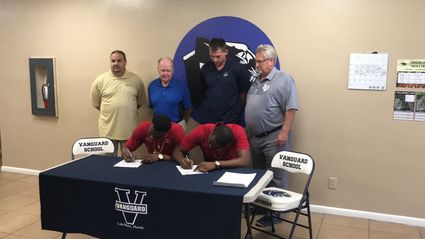 On a beautiful March afternoon, we were asked to join in the celebration being held at The Vanguard School in Lake Wales. The sprawling 77-acre campus was hosting a special guest and honoring three athletes who will further their education after graduation from Vanguard.

When I arrived on campus I was met by Julie Diaz, Director of Development, and she was bubbling with excitement to take me to the gym for the signing of the three athletes. As we meandered to the gym, students, staff, and faculty were also heading in the same general direction.

When we entered the gym, there were cakes honoring Stephen Knowles, David Labardy, and Joakim Marie Joseph "JoJo" in the school colors of Western Oklahoma State College. It was definitely a day for celebrating the achievements of these three student-athletes. A table with three chairs was set up directly across from the trophy case highlighting the successes of the Vanguard athletics programs.

Soon after I arrived, I had the chance to meet with Russell Rogers, the athletic director at The Vanguard School. He was beaming with pride for the success and potential of these three young men.

As I waited for the ceremony, the video crew was setting up, students were beginning to fill the room, and Head Basketball Coach Dan Sheppard entered the room with the Coach from Western Oklahoma State College. Rolando De La Barrera has been with the Pioneers for the past 13 seasons. He was on a multi-week recruiting trip and had made time to be here for these guys on their special day. 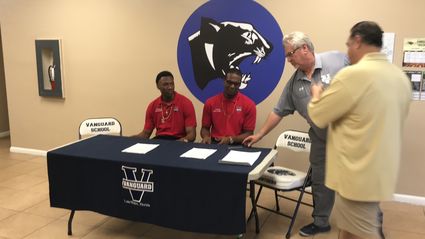 A few minutes later the gentlemen of the hour arrived. All three wearing the red senior polos and appearing excited and anxious about the event in front of them. As they sat down at the table, Stephen and David were presented with their letters of intent. They signed and smiled as multiple photos were snapped and videos were taken. After they completed signing, Dan, their high school coach, Adam Dirlbeck, assistant coach, and Rolando, the WOSC coach jumped in for a quick photo opportunity. There were also pictures with the AD, the Principal, excited family, teammates that helped them get to this point, and finally the third member going with them. Joakim will be joining his teammates as a walk-on next season. He will red-shirt the first season and then the three of them will be on the floor again together.

As the ceremony came to an end, everyone gathered around the cake to celebrate and enjoy the moment. Three young men will graduate as Panthers and start their college journeys as Pioneers for Western Oklahoma State College. If you find yourself in the heart of Oklahoma, stop by Altus during the basketball season and watch some Florida boys tear up the hardwood in the Oklahoma Collegiate Athletic Conference.