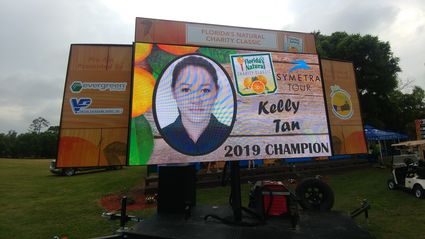 Anyone who has ever said watching golf is boring has never attended a Symetra Tour event.

From start to finish everyone present gave their all to make this professional and qualified amateur ladies developmental tour coupled with Florida's Natural's fundraising arm benefit event a resounding success.

More than 200 volunteers administered to every need from the Pro-Am to the Junior Clinic Special Events to parking attendants to scorekeepers to standard bearers required throughout the week up to and including the actual 3-day 54-hole tournament accommodating in first-rate fashion these talented women, caddies and fans.

Approximately 10 percent of these female athletes will make it to the Big Dance, the LPGA Tour. Although most are not names you will recognize, the spirit and respect these lady golfers bring to the sport project the game into another stratosphere. There simply is nothing on Earth that compares to the Symetra Tour (See http://www.symetratour.com for schedule and more information.)

The winners were many: charitable organizations near and far who exemplify the meaning of giving; Florida's Natural Growers Foundation which has distributed over $1million in grants since its inception to nearly 100 appreciative not-for-profits; and the generous benefactors who show up to play, support and encourage others to get involved in one of the most important, high level events held in Polk County.

Challenged at picturesque The Country Club of Winter Haven the 11th annual Florida's Natural Charity Classic greeted a 132-player field with a purse amounting to a whopping $125,000. With this much time and energy expended before the actual event began on Friday, March15 the stakes were high, and the pitfalls many where only one winner would emerge from the pack.

The tournament began for me on the #1 hole which for everyone else was actually the 37th hole. I initially followed the pairing of Katherine Perry (Cary, NC), and Kyung Kim (Chandler, AZ) who started the day at 1:20 pm with identical scores of -7 (7-under par) while the 36-hole leaders Laura Wearn (Charlotte, NC, -10) and Kelly Tan (Batu Pahut, Malaysia, -11) teed off 30 minutes later as the final twosome.

Strange things happen when there are careers on the line, a pot of gold and bragging rights to the winner, and the Volvik Race for the Card wherein the Symetra Tour awards LPGA memberships to its top money list players toward the end of the season. The Tour now boasts 24 individual tournaments and is growing in terms of popularity and number of hosts.

As the afternoon progressed the weather followed suit with intermittent rain adding an obstacle to the ever-present wind that whipped up with no apparent continuity to further challenge the field.

On the par-5 13th Ky Kim leaped into the lead by two strokes at -12 over Demi Runas (Torrance, CA) and Kelly Tan who were both at 10-under several holes back.

With no cushion, if her 5-under par 67 next to the best score of the day (Vicky Hurst shot a blistering 7-under 65 and finished T9) was to hold on Kyung was going to need help from her competitors, Runas and Tan, who were hot on her heels with plenty of holes remaining.

Kim wished she hadn't laid up on the par-5 18th as Runas was hole high in two and converted an up and down birdie-4 to overtake Kim and suddenly Demi was the clubhouse leader by one at 13-under.

Tan entered the 18th hole, the 54th and final hole of regulation two strokes behind. But the day before she had rifled off five straight birdies over the final 5 holes to take the 36-hole lead and was still a long shot threat. 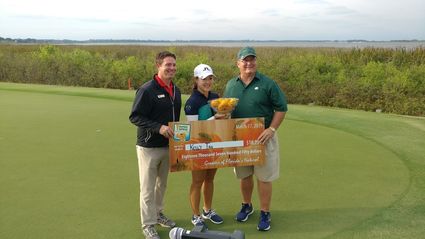 Needing an eagle to tie, the 25-yr-old Tan dug deep and hit driver and then a hybrid second onto the green, and miraculously sunk the putt to tie Demi Runas.

At that point Tan was literally on a roll, and in what was to be a one-hole playoff replayed on lucky #18 Tan won the toss, teed off first, and using driver overpowered Runas to win her most important tournament to date.

It is often said that charity begins at home, but for Kelly Tan charity will forever reside at the 2019 Florida's Natural Charity Classic.