Pickleball is Not a Pickle, But it is a Ball to Play! 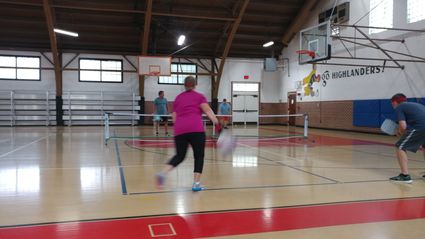 "It was started in 1965, in Bainbridge (Island), WA," Ambassador Helene "Pookie" DeCocq states emphatically. "It's just getting to (Florida and) the Midwest. There's tournaments all over."

Carol Yarbrough adds, "We started with like four people."

Another lady Pickleball organizer and player Deborah Waldrip chimes in, "And it just started growing. It's one of the fastest growing sports."

From those first four players the group soon doubled to eight, and then 16 women. Although not mandatory, games are usually played as doubles so you might want to seek out a partner before you begin your Pickleball odyssey.

The sport was invented by accident-or at least out of necessity-by three fathers whose children were progressively bored with their regular summertime routine.

Eager to please their kids, these creative dads combined the sports of tennis with ping pong on a regulation badminton court using a whiffle ball and a hardboard racquet.

A regulation ball today weighs about an ounce and it is approximately the size of a baseball. A heavier ball could potentially hurt someone if they are hit at close range. Racquets are a maximum of 24 square inches, and the grips are traditionally 4-4.5 inches in size.

Although the history of Pickleball cites several origins for the name, the most widely accepted story was that one of the families had a dog, Pickles, who loved to chase the ball.

Whether real or fabricated this explanation is a lot better than the truth, which was that no one really knew what to call it: Pingbat, Tenminton, Badpongnis?

None of which are nearly as appealing as the strangely appropriate name, Pickleball.

"Based on the Sports & Fitness Industry Association's research," conveys researcher Alex Kerman, Business Operations Manager of the SFIA, based in Silver Spring, MD. "We see that Pickleball is one of the fastest growing sports in the US.

"Out of the 100+ activities that SFIA tracks, Pickleball was fifth based on the three year average growth."

What is the attraction?

First and foremost, Pickleball is infectious.

It's fun, promotes community, and is an excellent source for exercise and satisfying one's competitive nature. Pickleball is much easier to jump into than some other sports. Courts can be literally found anywhere, and tennis attire is all that is necessary once you have purchased a racquet. I found several new ones listed on Craigslist priced from $35-$100.

When something is good for you there's normally a downside or side effect, but with Pickleball, especially popular among seniors, the only disadvantage I can observe is it can quickly become an obsession.

I have actually heard of pickleballers who deserted their families and shirked household responsibilities to devise an itinerary that enabled them to leapfrog from one facility to the next in search of new venues to invade and rival teams to conquer.

Another bad habit pickleballers exhibit is the tendency to take over and control the use of traditional tennis or basketball courts to feed their addiction. Diehard tennis aficionados are justifiably concerned, and a fair amount of former tennis buffs have defected to the dark side and their black sheep cousin. Just hearing that idiotic epithet, "Pickleball," sends shivers down their spines.

"It's a really different game-we play at beginner's levels to advanced. The ball goes about a third of the speed of a tennis ball and the court is about a third (the size) of a tennis court so it makes it really easy to get around," Eakins explains. "There's a lot of strategy to it."

According to Pookie, the Pickleball Ambassador from Missouri and a Lake Wakes seasonal resident, "There's a big website, http://www.USAPA.org, if you want to check it out,"

And check it out you should if you are searching for a new activity, like to travel and/or meet new people, and could use some rigorous exercise to get or stay in shape.

Become a part of the Pickleball mania.

For the foreseeable future here are the Kirkland Gym Pickleball hours: