4 p.m. Saturday May 18 at Highlander Hill 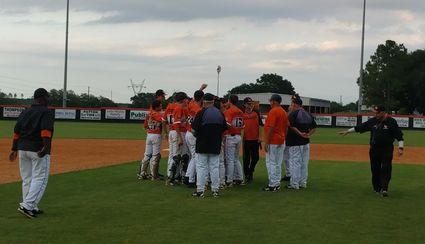 Our Lake Wales Highlander baseball team, 21-6, is riding a 15-game winning streak into an FHSAA Regional Semifinal test against the Dunedin Falcons this weekend after besting the Boca Ciega Pirates Wednesday afternoon, 7-3. The playoff game will be at 4 p.m. Saturday, May 18 at Highlander Hill.

Lake Wales Coach Don Bridges and his seasoned staff have been steadily on course this spring honing their players offense, defense and pitching to bring the team on an ascending trajectory this post season.

"In the playoffs you have to relax and have fun," Coach Bridges relates.

"We just started off slowly. It took us some time to figure it out."

And figure it out the Highlanders did. In the bottom of the sixth and one run behind, District 10 Batting Champion Ben Gilbert (.516 season average) led off the inning with a surprise bunt that turned into one of Boca's three errors in the game when catcher Zach Hill overthrew first base.

District RBI Champion (28 total) Abdiel Flores hit a ground ball the led to both a score and another base runner after yet another throwing error by the rattled visitors.

Blake Bradley walked to add insult to injury for the suddenly struggling Pirates, and a single by Jared Mueller scored Ricketts to go take a commanding lead.

Catcher Shalor O'Bryant walked on four pitches, and a further frustrating combination of apparent wild pitches and passed balls loaded the bases and on the return trip to the plate for Gilbert, another walk forced in the seventh and mercifully, final Lake Wales run, their fifth in the inning.

Tommy Ricketts batted in the go-ahead runs in the bottom of the 6th to put Lake Wales up 5-3 on a slicing right field double.

Commanding their own destiny in a sudden death march to State the Highlanders are now in the driver's seat experiencing firsthand Coach Bridges pre-season prediction that the team with the least mistakes would come out on top.

Clint Lerch, who pitched a 5-inning perfect game against district rival Poinciana on May 7, combined with reliever Landen Atkins to hold Boca Ciega to just three hits with Atkins taking the win thanks to a spectacular 6th inning show of force and fortitude.

It doesn't get any easier from this point on. Dunedin is 20-8 vs. Lake Wales, 21-6. No doubt this will be a great match up and a convincing reason to attend this Regional thriller at Highlander Hill in a season with plenty of downs and ups.