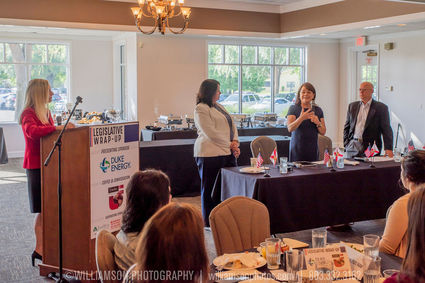 To demonstrate the flaws in current Florida law regarding emotional support animals, state Rep. Sam Killebrew said he paid a fee online and registered his stuffed baboon named Ophelia. He wasn't able to get the lax law toughened this year but he did call attention to how easy it is, especially for apartment and condo dwellers, to circumvent the rules.

That was just one issue East Polk County business leaders heard about as they gathered for breakfast Thursday, June 13 to learn more about this year's state legislative session, which ended May 4. Hosted by Duke Energy, the event at Cypresswood Country Club drew members from the Winter Haven, Lake Wales and Northeast Polk chambers of commerce.

Killebrew, Sen. Kelli Stargel and Rep. Colleen Burton described what they considered successes and talked about some of their bills that didn't pass but that they plan to continue working on next year.

The lawmakers agreed it was a positive session with little infighting and said passing fewer than 200 of the 1,675 bills filed was actually a good thing. Sometimes, they said, killing bad bills is just as important as passing good ones.

Killebrew highlighted successful passage of legislation that will make it easier for veterinarians to report animal abuse. They still won't be able to reveal the owners' names and medical conditions of animals without a court order, but the vets at least can get an investigation started to protect abused animals, Killebrew said.

Stargel said she was pleased that the Legislature restored funding for education, expanded local school district flexibility and approved raises for some long-overlooked state workers. She said she will keep pushing for a "pro-family" law that would require parental consent for minors seeking abortions.

First elected in 2016, Burton said she enjoyed her leadership role this year helping new members learn about the legislative process. She encouraged those attending the breakfast to keep in touch with their legislators year-round, not just during the 60-day session, and to become strong advocates for what they feel are priorities. She cited a positive trend of arts organizations going through a structured grant process, rather than just trying to get their legislators to push through special projects for funding.

The member projects become vulnerable to the governor's line-item veto, while those going through a grant process are easier to justify. She said arts enthusiasts should stress their impact on the local economy.

Stargel expressed optimism that Gov. Ron DeSantis will not veto the $1.5 million in the budget that Polk State College uses to fund its J.D. Alexander Center in Lake Wales. She said the community has done a good job advocating for the funding and linking it to workforce development, which is a priority of the governor.

The approved budget goes to the governor Friday, June 14, and he has 15 days to approve or veto the funding priorities. Stargel said if for some reason the governor strikes the Polk State funding it would be possible for the legislature to override the veto as they did in 2017 when Gov. Rick Scott vetoed $3 million in funding for the Lake Wales campus. 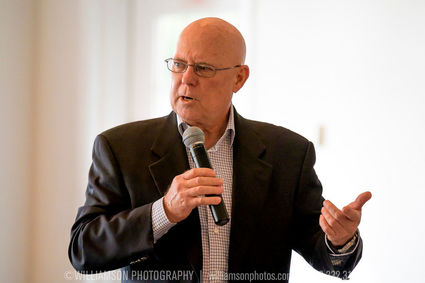 Killebrew said he was pleased that the Legislature agreed to some reforms to make it harder to put proposed constitutional amendments on the ballot. He said he prefers legislation that can be modified more easily rather than changing the constitution, which requires another statewide vote to alter. Killebrew said the new law will ensure proposed constitutional amendments are really the priorities of Florida citizens, not initiatives pushed by out-of-state interests that pour millions of dollars into petition signature gathering efforts, often by paid workers from outside Florida.

Other issues the legislators mentioned include infrastructure, transportation, health care, sex trafficking and the hemp industry.

All eight members of the Polk County legislative delegation recently earned "A" grades from the Florida Chamber of Commerce for supporting business-friendly legislation. Stargel and Burton earned perfect scores of 100, while Killebrew received a 97 on the 100-point scale.