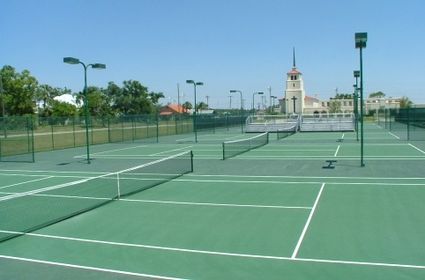 Scott Blackburn said he and his wife Carrie are tired of carting their four children to other communities because Lake Wales doesn't have enough recreation and sports facilities. Blackburn expressed his frustration to Lake Wales city commissioners at a recreation workshop Tuesday, June 25.

Commissioners were reviewing the latest plans for expansion of the Crystal Lake Park complex between the city library and Lake Wailes Park.

"We travel to other cities because we don't have adequate facilities," Blackburn said, noting there are often wait lists to use the city's five tennis courts.

City Recreation Coordinator Stephanie Edwards said the recommended formula is one court per 1,000 residents, which means Lake Wales only has one third of the 15 courts it needs.

"This is a long-range plan that could take many years," said City Manager Ken Fields, who is seeking commission input on priorities so city staff can draft the proposed budget for the 2019-20 year, which begins Oct. 1. During initial budget talks this year commissioners already have expressed interest in a performance stage and restrooms at Lake Wailes Park.

Fields said he would continue looking for alternatives and grant funding for the recreational improvements and pursuing funds from Polk County, which he said should be sharing more of the special funds it collects. Fields' mention that Community Redevelopment Agency (CRA) funds might be used drew an immediate reaction from Vice Mayor Robin Gibson, who says he is "obnoxious" about making the Park Avenue redevelopment the highest priority for the limited CRA dollars.

Gibson said any Crystal Lake improvements, including lighting and landscaping, should be consistent with those recommended for nearby downtown.

Bok Tower Gardens President David Price expressed concerns that what was being called a "master plan" for the Crystal Lake area was actually a "a collection of interesting ideas." Price urged the commission to invest money in a more in-depth design plan, possibly using downtown urban planners Dover Kohl and Associates. "The best money you can spend is on planning," Price said. "This is not a good plan. You can't start a job with a bad plan."

Price delivered a letter from his wife, Catherine, who could not attend the workshop. She also called for engaging a specialty firm like Dover Kohl to provide planning services for all of the city's parks and to bring together various community groups in a coordinated effort.

"Process is key – the first step to a good master plan for Lake Wales is to break down the barriers and develop an environment of cooperation and collaboration," she wrote. 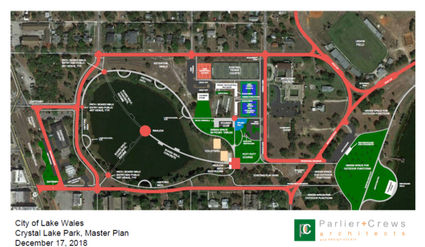 She called for the commission to abandon their plans for paths encircling Crystal Lake and to focus on maintaining the "tranquil and serene natural area" and improving water quality.

Vice Mayor Gibson also expressed concerns about the water quality and said since the lake was more of a retention pond with levels rising and falling he didn't think putting a concrete boardwalk into the lake leading to a pavilion in the center would be workable.

Darrell G. Washington questioned the costs, expressing concerns that the city's Northwest section might be neglected. Fields said the city has improved Northwest recreation facilities and has plans to do more.