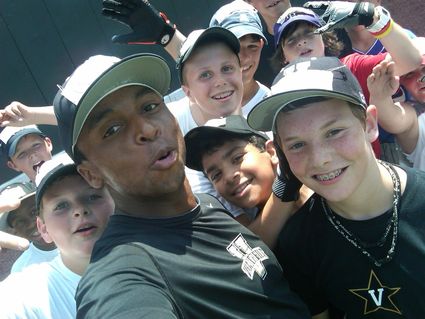 Jonathan White says his baseball career was cut short because he put his career in the hands of others his entire life. He accepted that coaches told him he wasn't a starting player because he wasn't good enough.

He was a standout player in local leagues, regularly featured in the Sports section of the local newspaper. At age 10, he was invited to play in Cooperstown, NY with the best baseball players in the world.

Despite two years sitting the bench in high school his senior year he received the highest district honor of being named District MVP and named 1st Team All State Tennessee. His district batting average in 2004 was over .500, and he attracted attention from college and professional scouts, including legendary Tommy Lasorda.

At Vanderbilt University he played for #1 Nationally ranked team in 2007, which went 56-13 for the season and won the SEC Tournament. Throughout his career at Vandy, he trained side-by-side with the best players and coaches in the world, and was drafted twice to the major leagues. But he was released after one year playing for the San Francisco Giants, and found himself "suddenly back home, depressed, broke, and with no direction."

White is now committed to offering baseball and softball training to young people throughout Polk County. He is in Lake Wales most Mondays to attend meetings as a member of Rotary on the Ridge. He offers one-on-one sessions or training for groups of up to six. He charges $15 for group sessions, trying to make the classes affordable for all families.

"All parents wish the best for their children in all areas of their life," White said. "The thing is young kids have no idea what it takes to be successful at the highest level. I for sure had no clue. Not until I was shown how to be a winner."

White grew up in a town the size of Bartow attending a high school with no fancy hitting facility: "In the winter, we would just put up nets behind the basketball bleachers and hit tennis balls. In warmer weather, we would hit outside in a makeshift batting cage where the thrower had to dodge balls ricocheting off the light pole inside. My coaches told the other outfielders not to let me try to catch flyballs because my defense was shaky.

His dad tried to help by buying all kinds of baseball videos and making him watch them over and over: "He never played baseball in his younger days, but he was my main coach most of my life. He did the best he could, but it usually wasn't very good advice."

White says he doesn't make excuses or blame anyone for his struggles as a player.

"It was MY career all along, but I failed to realize that until it was over. I never realized that I was in the driver's seat and could call the shots," White said. "It was my job to seek out the best coaches that could help me get to the next level. It was my responsibility to critique myself as a player and work on the areas I needed to improve. "

White said any of his former teammates and coaches would say he was one of the hardest workers on the team. But hard work alone is not enough. The quality of the work must be at the highest level.

After the dust on his career settled, White started instructing young players on the things he wished he had been told. He studied mechanics and how to teach different aspects of the game.

"I began to realize that confidence is the most overlooked skill in a successful player. Confidence is a skill and it can be taught," White said. "I realized that the reason why I had no outside coaches as a kid is probably because either my parents couldn't afford it or they didn't see the value in it. So I made a decision to make the cost of athletic training affordable for the average family."

White says he tells parents if their children are struggling on any part of the game it's because they aren't working. Parents invest in gloves, shoes, bats, bags, batting gloves, time and travel, but to make it work they need to invest in training to give their children the best opportunities for success.

Workouts are action packed and full of teaching points and opportunity to work on different skills. Here is a sample of a throwing, defense, and offensive group workout:

These videos describe White's philosophy and how he motivates young people to be winners:

• Message To All Youth Athletes: Best Advice I'll Ever Give https://www.youtube.com/watch?v=a2c2uFJTErw&feature=youtu.be

• Don't Quit On Your Baseball Dreams! Here's My Story! https://www.youtube.com/watch?v=e0juePPSH50&feature=youtu.be