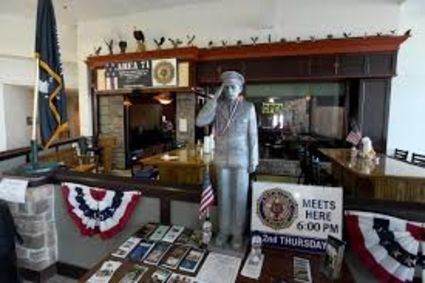 American Legion Post 71 is once again looking for a new home. The post closed its Area 71 Restaurant and Bar at Eagle Ridge Mall in June after six months of operation.

Past Commander Andy Anderson said the mall operation was successful until Area 71 began experiencing problems with its air conditioning and sewer system. The final blow came after a refrigerator breakdown caused the post to lose about $1,500 in food.

"When the people don't come, when the mall itself is hot, it's difficult," Anderson said.

Anderson said the mall management tried to be supportive but the issues just couldn't be resolved in a timely fashion by the mall owners. He said he appreciated the mall giving his volunteers extra time after they closed to move out.

While the post looks for a new venue, Impact Church has agreed to host the Aug. 8 legionnaire meeting. The meeting begins at 6 p.m. at the church, located at 1201 Burns Ave. in Lake Wales.

To offer a full range of programs the post needs a building with at least 5,000 square feet, Anderson said: "We could do bingo and raise money. We could have libation. We could have some room for services and programs."

Anderson said the post includes about 400 members, including about 300 legionnaires, 25-30 Sons of the American Legion and 60-90 in the ladies auxiliary. The volunteers, many over age 60, worked hard to clean up and operate Area 71 at the mall and to support veterans in a variety of ways. The post provided food, clothing, furniture and items such as wheelchairs and shower stools to veterans and helped some with insurance and even finding homes, Anderson said. Some posts are just social gathering places for their members but post 71 helps any veterans and their families, not just American Legion members, he said.

"We try not to be just a bar, we want to be a full-service post," he said. "It's hard to find a place that's reasonable."

The post was very active at the mall with bands, events, motorcycle rallies, bike runs and work with the homeless coalition, Anderson said: "We did our due diligence. We did everything in our power to increase business and advertise not only ourselves but the mall."

With the right venue, possibly even in space donated by someone who wants to help veterans, Anderson is optimistic the post can do even more.

"What we want to do and what we have been doing, is build up some patriotism and rapport in the community for the veterans," Anderson said