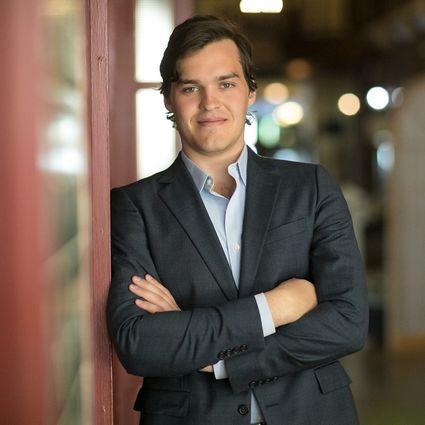 George O'Neill III has traveled the world, but he still has a heart for small cities like Lake Wales where he grew up and played youth soccer.

The 25-year-old University of Florida theater major has created a tool to help local businesses, cities and organizations promote their events and expand their reach. He's holding a pre-launch mixer Aug. 28 to introduce his PROMO app to potential early adopters in Polk County.

O'Neill recognizes the frustrations of people who create a great event but don't have a way to get the word out.

It's taken him five years and a few false starts, but O'Neill now believes he has a simple and affordable tool that can be a game changer: "It's like going from using a hand screwdriver to a power drill."

Users of the PROMO app will log in and enter the details of their event. Someone looking for an event plugs in the name of the city and all the options show up as pins on a map. Organizers for a small fee can "sponsor" their events to give them even greater exposure.

"Because it's based on location, the relevant people see it. When somebody logs on and it's in Lake Wales, they're going to see it on the map," O'Neill said. "You're going to reach the people who are legitimately interested in what's going on."

O'Neill wants to cater to the smaller communities that make up most of America. As the key players in a city start using the PROMO app, O'Neill expects it will become the go-to community calendar. The beauty of PROMO is its affordability, ease of use and ability to really target the specific audience people are trying to reach.

"The point is we've got these massive tech companies and none of them ever cater to small business," O'Neill said, noting people have little control when they try to promote using Facebook Events and if they are trying to sell tickets on a platform like Eventbrite the fees really mount up.

"Facebook is too big and it's too expensive and there's too much involved. It focuses on bigger areas," O'Neill said. "What PROMO does is it changes the power dynamic, the control. Think of how much quicker and cheaper it would be if you did it all through PROMO."

Getting people to switch to PROMO shouldn't be difficult because they are already trying other solutions that are harder to use, take more time and are not getting results, O'Neill said.

PROMO will offer a ticketing package for a flat fee that doesn't skim off a percentage of ticket sales and one that can offer reports for organizations that need details to support grant applications. In addition to finding new prospects, the PROMO app will allow people to upload their own lists and share events.

"What we're doing now is really focusing on local businesses, how to revitalize and how to pump them up," explains Kiley Doll, who is helping PROMO with business development. "We want to help business by really encouraging consumers to visit them, maybe for an event as simple as Margarita Monday. We put the small business out front, we give them the ability to be on the same playing field."

PROMO doesn't offer to change the world, but it can save time and money, O'Neill says: "Really it just does one thing, that's what we do, we give you the ability to make your event planning and facilitating better."

O'Neill initially envisioned college students as the market for PROMO, its real-time nature catering to young people leaving a ball game and checking the app to find the best after-game parties. When it didn't really catch on, even when he dangled tuition reimbursement as a contest prize, O'Neill realized the greater need and potential would be in smaller communities.

"Most of the country is small towns – communities where people know their neighbors," O'Neill said.

He envisions PROMO listings of everything from car washes and walkathons to where to buy girl scout cookies.

The idea of helping people find where to buy Girl Scout cookies actually came from O'Neill's memories of his two sisters standing for hours peddling their sugary wares. He says it's a "cheesy tag line," but "I would like PROMO to be the largest facilitator of girl scout cookie sales in the country at some point."