'Blue Family' Gives Back to the Community 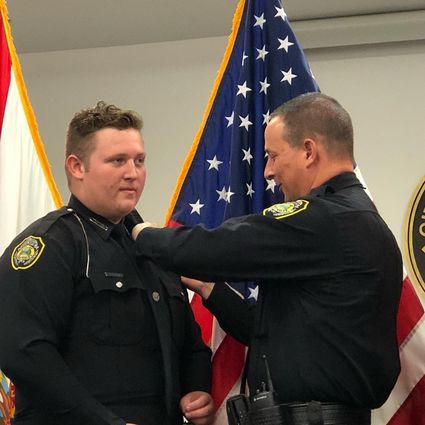 Terry Schulze grew up in a "blue home" where he watched his father head out daily to protect and serve the community. Becoming a police officer was a natural choice for the 19-year-old, whose father Troy is the Lake Wales Police Department's deputy chief, now approaching 25 years on the job.

Terry entered the profession with open eyes, having served nearly three years as a volunteer patrol cadet before completing 770 hours of training at the police academy at Polk State College, where his dad got his training. And during his first month on the job, about fifteen 12-hour work days, he's seen and done most everything a police officer expects to encounter: traffic enforcement, crime deterrence, administering CPR and making arrests for drugs, weapons, outstanding warrants and more.

"It's fun so far, learning everything. It's still a little stressful, but I have a good trainer (Alfredo Carlos)," Terry said.

Like his dad, Terry plans to make police work his life's career: "Growing up in a house with law enforcement I saw what the life was like. You have a lot of down time where you can be with your family. And also being able to help out the community and reach out to the people who need help. I love the idea of that - being able to help people."

The entire Schulze family is committed to community service in Lake Wales. Terry's mom Kami is youth pastor at Impact Church and sister Kaylee teaches at Janie Howard Wilson Elementary – "a Lake Wales family giving to Lake Wales is the best – we love it," Troy said. Terry already is getting more involved in the community by volunteering as an assistant football coach at Bok Academy.

"This is my town, it's where I grew up. I know people, I know the streets. It's a good place to get in. Of course working with my dad is going to be nice," said Terry, who graduated in 2018 from Lake Wales High School, where he played football and wrestled. "It's the town I grew up in, a good place to give back and serve the community."

At a young age Troy moved to Lake Wales, where he played sports, started dating Kami at age 16 and graduated high school in 1992.

"I've done a little bit of everything here. Being a hometown boy I didn't work anything with the drug unit – everybody knew me, so it would not be very productive," Troy said, noting policing where you grew up isn't always easy. "It is difficult. The challenge that Terry will face being a hometown guy is tough. You end up policing your own friends, family, teachers.

"Some of the kids he's able to mentor now, he can continue to mentor and there's times he's probably going to have law enforcement action, interaction with them. It presents a challenge when you pull over classmates and they expect a break or you end up in an investigation and they're a suspect, but you always have to do the right thing."

The deputy chief said he prays for all officers and other first responders daily, but knowing "my kid's out there" gives him a different perspective now when he hears a siren. Since Terry's grandfather on his mom's side, Mike Lasseter, is a retired firefighter, Troy offered that career choice: "They get recliners and cots. I encouraged him to be a fireman because everybody loves those guys, but he wasn't hearing it. It's who he is, it's nothing we told him to do. It's just what he decided to do."

Instead of getting any breaks from being the deputy chief's son, Terry saw some extra pressure at the police academy and expects to be held to a higher standard on the job. His dad isn't allowed to deal with any personnel decisions involving his son. 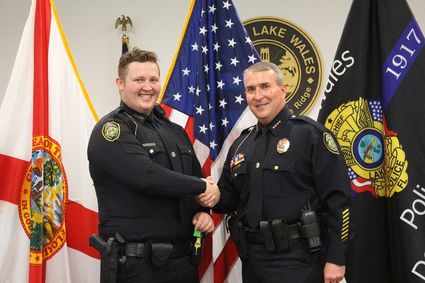 "I will always be his dad, but to see him take off and blossom as his own officer, being himself and making his own impact, touching lives, it's really important. The job gives us a very, very unique opportunity to do that."

The deputy chief offers this advice: "If you just do your job and don't make it personal, stay professional, treat people like people, understand that your success isn't by chance. Success is with intent and it's keeping your head on right, keeping your head in the game, and all our officers have to do that, not just Terry."

The deputy chief acknowledges recent public criticism of police has hurt morale and caused a drop in applicants, but "I think the majority of the public supports us greatly.

"Living here, there's hardly a day that goes by that someone doesn't come up to me, on and off duty, shake my hand and say 'thanks for you, thanks for your family and what your son is doing now.'"