The Haunting of a Grand Lady

As told by the GFWC Woman's Club of Lake Wales 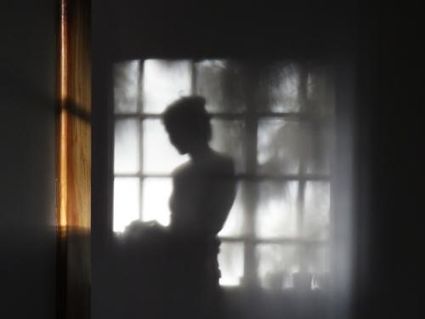 It was just another ordinary morning when I opened the doors of the old building. I wasn't even worried about turning on the lights. After all, I'd been here many times before and I could make my way around in the dark because I knew the place so well. Confidently, I moved inside, locking the doors behind me. The hall was dim because the day was cloudy and sunlight only filtered in on a good day when the dilapidated blinds were closed. Unhurriedly, intent on my mission, I began to make my way across the large main room, heading towards the back of the hall where cabinets held our written history.

Halfway across the room, I suddenly heard a door close. I stopped in my tracks, my heart jumping in startled concern. I looked around, expecting to see someone come from the front door, even though I hadn't heard a key turning in the old lock. Seeing no one, I peered around, looking to see if somehow someone had opened one of the other doors. Again, the sound of a door closing reached my ears, followed by a strange rustling coming from somewhere in the depths of the building. I was seriously concerned now, so I hurried into the living room, thinking to hide behind the wall that separated it from the main room. The old windows loomed large in shadow and the worn furniture created dingy shapes in the room. My mouth ran dry and my footsteps echoed loud in my ears.

As I stood there wondering what I should do, my mind raced through all the things they tell you to do if you suspect an intruder. But, as minutes passed and I heard nothing more, I straightened up and laughed at myself. What an idiot I was. There was no way anyone could be in the building and what a fool I was to let my imagination get away from me! I needed to get on with it and go back to my mission.

As I made to leave the parlor, there was a sudden clap of thunder and a rumble shook the building. My heart began to pound and the blood rushed to my ears. That's when I felt it-that really dreadful sensation of being watched by someone else.

I felt coldness on the back of my neck and my spine tingled. The air around me became musty with the smells of old things.The shadows swirled around, slowly taking on shapes and movements.

Looking towards the windows for some sort of light, I was terrified to see the shimmering figure of a young woman who looked to be dressed in strange looking clothes from another time. Shaking my head, I blinked my eyes, certain that my imagination was running away with me! But no. As I looked again, the lady glided forward, looking off into the room with eyes that despite their shadow, seemed sad and lonely.

As I stood trembling, the shadows around began to gather into a kaleidoscope of misty scenes. I saw women supporting the war effort with their "Bundles for Britain" sewing and knitting groups, ladies on the runway at a Fashion Show sporting Wards Women's Wear, ladies performing skits, dance choruses, and talent presentations at the "Wales Folies."

I saw rows of bookshelves with the beginnings of a newly formed library, and young girls twirling in their fancy dresses at a Christmas Cotillion Ball. There was a table laden with food for an International Festival gathering, people laughing and having a good time at a Spaghetti Dinner, and women with their children marveling at the beautiful settings of a Community Café Dinner.

And then, when I thought I could no longer breathe with the quick swift passing of events, the scenes began to fade back into the shadows of the room. The woman lowered her head as if overwhelmed with the loss as she turned slowly back towards the window. I heard a soft sigh and the echo of a word escape in the air. "Remember" reached my ears as the lady faded from my sight and the room returned to its normal self.

Still reeling from what I had seen, I made my way to the door, stumbling out into a day that was still cloudy, echoing the fog that still had me in its grip. I turned and looked at what had once been a "Grand Lady." She was really a piece of history that should have been preserved, one of those places most people would turn into a museum of some sort, to remember something special of the time period, with refurbished fixtures and furniture.

Instead, she sat all alone in the misty day, looking tired and forlorn. Her outside was once a beautiful finish of white with a lovely porch and iron railings that spoke of southern charm. But now, the paint was peeling from her doors, with screens that sagged and railings that were rusted and scraped.

She groaned from the pain of a gaping crack on her west side, one that was ever widening with the settling of the ground from the rains coming off the lake. Her windows were rusted and weeping from the elements, letting in punishing moisture that soaked her interiors walls. The only thing that was still in great condition about her was the property where the beautiful trees graced much of the yard, a tribute to the conservation efforts at the time of her birth.

But as I looked at the Grand Lady, my mind turned to the history that her companion, the Shadow Woman, had asked me to "Remember." The Grand Lady had seen glorious events over her existence, and I knew it was important that she be allowed to make many more memories before her time was over.

As I looked at the windows of the Grand Lady, I was sure that I saw the figure of a woman raise her hand to me from their depths. The sigh of a word echoed again in my ears. "REMEMBER."