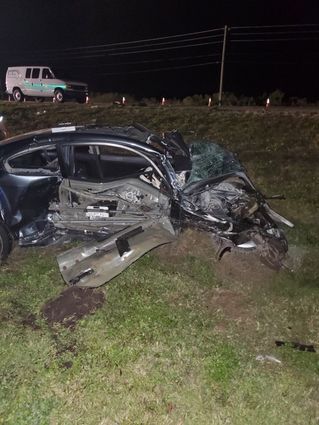 A three-vehicle crash on U.S. 27 near Tower Lakes Wednesday evening Feb. 12 resulted in the death of a 20-year-old Lake Wales woman.

Police are unsure who was driving the 2006 grey Toyota Scion, which was headed south on U.S. 27 when it turned left at the entrance to Tower Lakes into the path of two other vehicles. The two occupants of the Scion were Natali Jane Moreno, who sustained life threatening injuries and was later pronounced dead at AdventHealth Lake Wales and 22-year-old Bryshon Johnson of Winter Haven. Johnson sustained serious injuries and was airlifted to Lakeland Regional Health, but he is expected to recover. The northbound lanes of U.S. 27 were affected for several hours after the 7:15 p.m. crash.

Lake Wales Police investigators said Radashia Johnson, 27, of Lake Wales was driving her 2018 Chevrolet Malibu north in the inside lane of U.S. 27 and Rene Peralta of Kissimmee was in a white 2015 Ford F-350 pickup also headed north in the middle lane when the Scion traveling south at a high rate of speed turned left in front of them.

The Malibu struck the Toyota Scion on the right rear causing it to turn head-on into the Ford, where it sustained a second impact. The Scion traveled north across all three lanes, coming to rest on the shoulder of the east side of the roadway. Johnson and her two children were transported to Advent Health Lake Wales with minor injuries. A passenger in the Ford F-350, identified as Josefa Peralta a 67-year-old Kissimmee resident, was transported by ambulance to Celebration Hospital for minor injuries. No other injuries were reported.

The investigation is ongoing. Anyone with information regarding the crash is asked to contact Traffic Officer Sean Robertson or Traffic Officer Andrew Elrod at the Lake Wales Police Department at 863-678-4223.