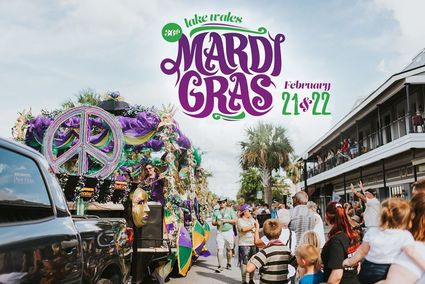 It's not quite New Orleans, but Lake Wales no doubt throws one of the greatest Mardi Gras parties most people will ever attend. Unbound revelry, crazy costumes, colorful floats, beads and brew will highlight the 36th annual event scheduled for Feb. 21-22.

The Lake Wales Mardi Gras attracts an estimated 15,000 people, making it one of the largest events of its kind outside of New Orleans.

Mardi Gras starts at 6 p.m. Friday Feb. 21 with the annual 5k GLOW run around the beautiful Shores of Lake Wailes and along the Rails to Trails community path. To sign up, visit https://bit.ly/2QTi0ww Check in will begin at 4:30 p.m. on the basketball courts at Lake Wailes Park. You will be able to register to run the race at that time if you haven't pre registered. Race packet includes: Bib, T-shirt, participation medal and a drink ticket. We will also give out awards for winners of each division.

The Mardi Gras festival also runs Friday evening from 6-11 p.m. with live music, children's activities, local food vendors as well as beer and wine sales. Entertaining Friday night will be Blue Rooster from 6-7 p.m., The Broke from 7:30-9 p.m. and B Haven from 9:30-11 p.m.

The Festival takes place at the picturesque Lake Wailes Park, on the shores of Lake Wailes. To see photos of last year's festival and parade, go to https://www.lakewalesnews.net/photos/03_02_2019

The Mardi Gras parade starts at 3 p.m. in the Historic Downtown district of Lake Wales and winds its way through the streets east on Park Avenue, south on Scenic Highway, west on Stuart Avenue, south on First Street and then east down Central Avenue to its dramatic close at Lake Wailes Park. The parade boasts dozens of floats from the local Mardi Gras Krewes, media personalities, County Commissioners and the Polk County Sheriff Department, including Sheriff Grady Judd. Children and adults alike enjoy scrambling for the thousands of beads thrown by the parade participants.

A highlight of each year's event is watching to see what kind of outrageous costumes will be sported by the flamboyant Krewe of Zazu. The Wild Shiners never disappoint as many of the city's business leaders camouflage themselves to dance atop and throw beads from their converted bus.

Lake Wales Mardi Gras has a long tradition of giving back to the community. Proceeds from this year's Mardi Gras will benefit the Wheels on the Bus campaign of Victory Ridge Academy. The school, which serves students with a variety of special needs, is trying to make up for lost transportation funding.

Last year the Mardi Gras gave Victory Ridge $5,000 to help with renovations of their new building and $3,000 to the Circle of Friends Ministry to underwrite their summer camp program.

For more information about "Wheels on the Bus" and to donate visit https://victoryridge.org/wheels/

For more information about the Lake Wales Mardi Gras visit http://www.lwmardigras.com or http://www.facebook.com/lwmardigras/

Mardi Gras celebrations go back several hundred years. The term "Mardi Gras" means "Fat Tuesday" and refers to the day before Ash Wednesday – the first of the forty days of lent preceding Easter. Christians on the time customarily gave up meat and other indulgences during lent, thus "carneval" or "farewell to meat" - - became "Carnival", a festive period when over-indulgence was in order.

The traditional colors of Mardi Gras are purple, gold, and green. However, Krewes (secret groups that make up the cast of characters in Mardi Gras) selected their own colors to brandish during Carnival. Kings and Queens and courts of these krewes are selected with utmost secrecy. Beads, doubloons, and other trinkets are tossed to spectators along the Mardi Gras route as "throws" – the traditional souvenirs of every Mardi Gras.

Because Mardi Gras is celebrated in various cultures around the world costumes and music vary according to location. Lake Wales has incorporated traditions from many of them including feathered costumes from Rio, Dixieland Jazz, Blues and Zydeco music, Cajun food and mask from New Orleans. Another tradition adapted from New Orleans is the Krewe of Rex as the lead Krewe in the parade escorting the Queen of Carnival and Prince of Wailes (our version of rex, King of Carnival). The Prince of Wailes is selected from the members of the Krewe of Rex. The Queen of the Carnival is selected by the hiding of the "Golden Bead" in the ceremonial "King Cake" which will be served to all the ladies present – she who finds the golden bead will take her place beside the King of Carnival.

The essence of Mardi Gras is in participation and be best explained in the words of Robert Tallant: "Mardi Gras is a spirit....an immortal one....as immortal as man's ability to make believe, to escape the dreariness of everyday life that is most of men's portion, to have fun, laugh, and to play...Mardi Gras is very old, but it is also very young. It belongs to the past, yet also to the present and the future. It will exist in other forms, in other times, in other places. It would be wonderful if the clown in the grinning mask should appear on all the Main Streets of the world, if . . . there could be a season, or at least a day, devoted to laughter."