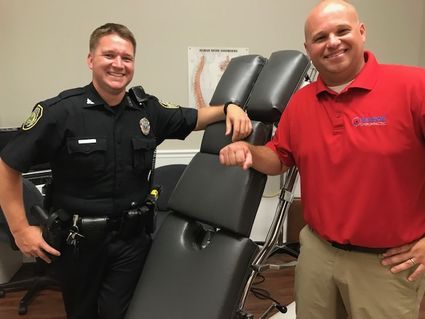 From his service 10 years ago as a police officer Dr. Anthony DeWald still remembers end-of-shift backaches after repeatedly getting in and out of his patrol car wearing a heavy duty belt and other equipment.

That's what made him feel even better about giving free exams and treatments this week to members of the Lake Wales Police Department as a thank you for their service: "There's kind of an instant camaraderie when people find out you were law enforcement as well."

DeWald is the new chiropractor in town, trying to introduce himself to the community while also giving back. A chiropractor since 2014, DeWald joined McKeon Chiropractic in March, right before the COVID-19 pandemic forced the business to halt operations. Now the clinic has fully opened, being extra mindful of safety precautions.

"It probably wasn't the best time to add on, but we're happy to reopen and get back to helping people," said Dr. Thomas "T.J." McKeon Jr., who graduated from the same school as DeWald, New York Chiropractic College in Seneca Falls, NY. Both are married with young children and just "clicked," sharing the same philosophy about healing, McKeon said.

McKeon said he'd been thinking about adding another doctor since his uncle, Dr. Mark McKeon, retired in 2016 after 35 years in the practice. T.J. McKeon's grandfather, Dr. Joseph McKeon, started the practice in 1950 and T.J.'s father, Dr. Tom McKeon, served there from 1973 until his retirement in 2001. McKeon Chiropractic is located at 2433 SR 60 East.

DeWald said although he's a Pennsylvania native, he kept feeling drawn to Florida. He said he saw McKeon's ad and "to be honest it was almost like I wrote the ad, how he worded it. So I said this is a person I want to align myself with because we had a lot of commonalities in how we treat patients, commonalities in how we look at chiropractic. It's really about just doing what's best for the patient."

DeWald said he explored a career in chiropractic in part because his wife worried about him working in law enforcement.

"I like the idea of being able to put my hands on people in such a way that's helpful and beneficial and a lot of times they walk out feeling better than they walked in so there's a lot of gratification for me in that," DeWald said.

Police officers DeWald treated Monday, May 18 said they were grateful for the special treatment and how the community is looking for ways to thank police officers for their service. 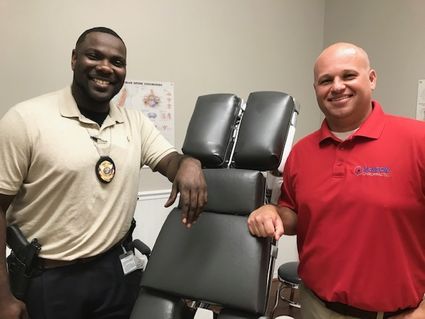 DeWald, who also had been a military police officer in the U.S. Army reserve, said he felt good about offering free treatments for the officers: "We're happy to serve them this week. They've done so much for the community and we're really happy to get back to them and help them feel a little bit better physically and get them to be able to move a little bit better than they have been previously."

Offering the free treatments was a good way to reopen the clinic and introduce officers to chiropractic care. McKeon and DeWald said they'd be happy when they start seeing more patients every day.

"We're here, we're open, we're seeing patients. We practicing hygiene and are staying as safe as we can doing what we're doing for patients," DeWald said. "We're happy to be doing it."

Chiropractic care is a natural method of healthcare that focuses on treating the causes of physical problems, rather than the symptoms. This is accomplished without the use of medications or surgery by combining chiropractic manipulation with physical therapies and rehabilitation.