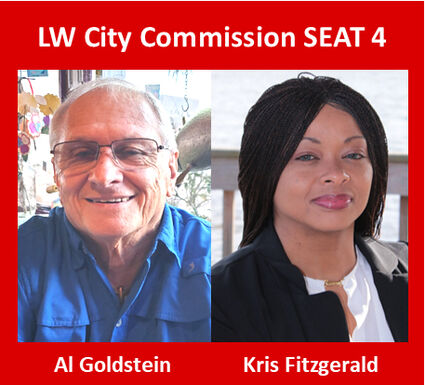 Still stinging from his April 6 defeat by just 32 votes, Lake Wales City Commissioner Al Goldstein came out swinging the next morning – citing racism as a primary factor in his loss and suggesting the city is "on the cusp of destruction."

Goldstein said he is not convinced his successful opponent, Kris Fitzgerald, will be a good commissioner and said she won on the coattails of Daniel Williams, who defeated Ricardo Navarro for Seat 2 by 15 votes. Goldstein said in two years he would apologize if he believes Fitzgerald has done a good job.

"As far as riding on anybody's coattails, the numbers speak for themselves," said Fitzgerald, who actually was the highest vote getter in the election, receiving 20 votes more than Williams. "Hopefully it was just a moment of him (Goldstein) being upset and it's not how he truly feels."

Goldstein said he is somewhat isolated, living in the gated Lake Ashton community, but he has worked to support the entire city. But he said he is not happy that 85-90 percent of the city commission meetings have been taken up talking about the city's northwest section, which is predominately black.

"I really feel like we've taken a step back because of racism in this city. If we don't recognize it, we're lost," Goldstein said. "We need a coalition of white and black, but basically we've resegregated ourselves. We are a microcosm of what's happened in this country."

Regarding Goldstein's racism comments, Fitzgerald said, "I've never mentioned race in my campaign. As a matter of fact, I don't want it to be split – black against white – I wanted people to honestly go out and vote based upon what they heard from the candidates."

Fitzgerald commended Goldstein for his military service and for the good he did during his two years as a commissioner.

"I equate any type of loss with grief. He probably said a lot of things out of anger and grief," said Fitzgerald, adding: "I do think anybody should take any type of defeat with grace and dignity."

Goldstein also took a swipe at local attorney Sara Jones, who supported both winning candidates on social media, accusing her of focusing only on the city's northwest section. Jones is president of the Lincoln Community Development Corporation, a nonprofit formed to boost business in the northwest section.

"The new mayor in this town is Sara Jones regardless of whether she's elected. She is running this city," Goldstein said. "I'll take my hat off to Sara Jones, who manipulated this thing – she did a great job. I don't blame the black people. The problem is we didn't stand up. The people I worked with, we failed."

Jones donated $100 to the Williams campaign and made no contribution to Fitzgerald; both candidates said they only met twice with Jones early in the campaign.

"While I am flattered at the amount of power he (Goldstein) seems to think I have, I respectfully disagree. Al is the only one who thinks I have the power to influence an election where nearly 2,000 people voted, the majority of those people I never met," Jones said. "I think it's quite disrespectful to Kris to credit me with that win because I didn't earn that, she did."

Goldstein said Jones helped build a strong base of support for Williams and Fitzgerald and worked hard to get out the vote, noting "We didn't have a coalition like they have." Jones said other than posting on social media she was too busy at work to help with the campaigns. She said she has absolutely no plans to run for mayor and is happy to support outgoing Commissioner Curtis Gibson in his 2022 mayoral bid.

"Al Goldstein is the first person I hear mention race. Al is the one making it about race when he lost to a black person," Jones said, noting she saw no Goldstein signs in the northwest section but many Fitzgerald and Williams signs in all areas of the city. "Al did not campaign; he did not reach out to the community to get their support."

Goldstein said he fears the new commissioners will abandon the Dover Kohl Lake Wales Connected plan to revitalize downtown and that they will push for the removal of Police Chief Chris Velasquez and possibly City Manager James Slaton. City commissioners have no say in personnel matters, except the city manager, city attorney and city clerk.

"I have no hidden agenda. I'm a very honest and upfront person," Fitzgerald said, noting she has heard good things about Slaton and looks forward to working with him and getting to know him better. She said she has resigned her administrative position at the Vanguard School and will be concentrating on her mental health counseling practice, which will give her more time for her city commission work.

Williams is on record supporting Slaton, saying "I'm excited about the opportunity to work with him," and during the campaign he cited the Dover Kohl plan implementation as one of his top three priorities. Neither has taken any public positions on the police department, which is currently undergoing an independent top to bottom assessment looking for areas to improve.

Goldstein was bitter toward Navarro's core donors, whom he called "the people who were supposed to support me but didn't lift a hand or give a dollar of support."

In 2019 Goldstein didn't have to campaign since he was elected without opposition to represent Seat 4 after incumbent Commissioner Tonya Stewart fell short of obtaining the petition signatures needed to run. He acknowledged his campaign strategy this year might not have been effective.

"I busted my ass for the City of Lake Wales and I got kicked in the head," Goldstein said. "I lost the race and the city lost its city. I'll go on with my life, and I hope the city can survive it."

You may blame it on Racism but I think that Incompetence is a more apropos term. I first bought propoerty in Lake Wales back about 2007. Back then, there was a fine Hardware Store on Park Ave., a fine French Bakery on Park Ave., a Hot Dog/Ice Cream store on Park Ave., and a very nice -up-scale consignmemt shop on Stuart Ave. None of those are here today, not looking good on your resume. I don't see downtown Lake Wales flourishing without a hotel; however, the local hotel does not appear to be any closer to opening than it was in 2007. FOR SHAME! Then there was the city requirement that restaurants have oversized grease traps. This is 19th Century technology and a needless expense to saddle local businesses with. Very anti-business. As you can see, those of of us who voted for your opponent, are pinning our hopes on the future of Lake Wales and some progressive leadership.