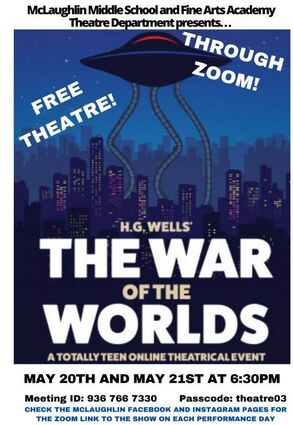 The McLaughlin Middle School and Fine Arts Academy Theatre Department is presenting a free presentation via the online ZOOM platform.

The students will perform H.G. Wells' The War of the Worlds at 6:30 p.m. May 20 and May 21. The ZOOM link is available on the McLaughlin Facebook and Instagram pages.

"The War of the Worlds" was an episode of the American radio drama anthology series The Mercury Theatre on the Air directed and narrated by actor and future filmmaker Orson Welles as an adaptation of H.G. Wells' 1898 novel The War of the Worlds. It was performed and broadcast live as a Halloween episode at 8 p.m. on Sunday, October 30, 1938, over the Columbia Broadcasting System radio network. The episode became famous for allegedly causing panic among its listening audience, though the scale of panic is disputed, as the program had relatively few listeners.