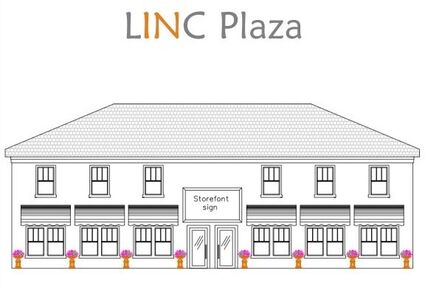 The Lake Wales Community Redevelopment Agency has agreed to sell a parcel of land at the intersection of Lincoln Avenue and B Street on which developers have proposed a mixed-use building that includes both commercial and residential space.

After the city issued a request for proposals, two bids were received to develop the vacant tract, currently owned by both the city and CRA. Florida Development Corporation was unanimously approved as the firm to move forward with its proposal for a two-story building dubbed "LINC Plaza''.

The building's footprint calls for 6,000 total square feet, including 1,400 in commercial footage, 4,200 for six residential units and 400 square feet of common space. According to company documents, monthly rent on the two-bedroom, one bath residential units – two of which would be on the first floor and four on the second – would be around $800.

"This is what we've wanted in that area, the start of reconstructing businesses, and putting business there that are possibly beneficial to the residents that are there," Mayor Eugene Fultz said. "FDC is a very good corporation to step forward to do this."

Half of the first floor commercial space could include a food service tenant, or a retail or food market, FDC officials noted.

"The other half of the commercial space could be leased out for office, governmental, and/or non-profit uses," the firm notes in its 24-page proposal. "Another option for this space would be for business development or shared/co-work space."

The residential units could accommodate a number of different individuals, developers said.

"These residential units are ideal for empty nesters, young urban professionals and small families alike," the proposal indicated. "(We) will work with our design-build general contractor to finalize the layouts to best accommodate two bedrooms, one bath, laundry, kitchen, dining and living rooms in each unit. Residential units will incorporate National Green Building Standards in the design and construction, for better energy efficiency and lower operating costs for residents."

FDC will be working with the city to create a shared parking space that will go toward supporting patrons/residents of the LINC Plaza and the public at large, officials added.

"The outdoor parking and green space area can be blocked off and used to host occasional events such as farmers markets, craft sales and food trucks," FDC noted.

According to an FDC provided timeline, the firm hopes to submit final building plans to the city in early October, break ground in late February, 2022, and have tenants and residents in place by the first quarter of 2023.

FDC also said the LINC Plaza project would give a financial boost to the city and CRA, while also serving as a catalyst for more development in the historic northwest neighborhood.

"The increased ongoing significant tax base increase from new residences and new commercial space, will continue to add revenue to the city long after this property is completed," FDC noted in its proposal. "With the addition of new residents living and/or working in the CRA area, this increased activity will catapult meaningful increased traffic and attention to Lincoln Avenue. The economic development stimulus of this substantial investment to the northwest community neighborhood should accelerate further build-out of this neighborhood and the 'Lake Wales Connected Plan' beyond."

FDC estimates that the entire project will cost about $1.6 million. The CRA agreed to the sale of the land for $15,000.