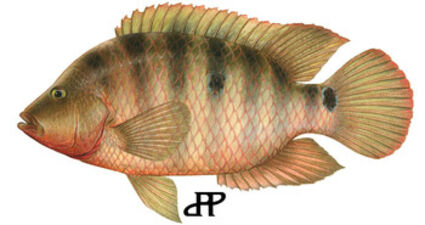 Our Purpose: To identify excellent Florida freshwater fishing opportunities and to provide anglers with relevant information that will enhance the quality of their outdoor experience.

Size: The current State Record is 2.37 pounds, and the minimum sizes for Big Catch are 1 pound or 11 inches for adults, and 0.75 pounds or 8 inches for youth.

Identification and similar species: The broken lateral line and turquoise ring on the tail are diagnostic; general coloration includes 6-8 bars that can be faint or dark; body color varies greatly in intensity sometimes with bright red on the chin, throat, and breast; has both spiny and soft dorsal fins and a rounded tail fin. These colorful fish are sometimes mistaken for another cichlid, the butterfly peacock bass which is more elongated and usually has a yellow ring on the tail. These fish have several nicknames including "reds" and "cichlids."

Edibility: Good; white to pink, flaky meat with mild flavor. No bag or size limits means anglers can catch and keep as many Mayan cichlids as they can catch.

Where to find them: First recorded in Florida Bay in 1983, now established and abundant in south Florida as far north as Lake Okeechobee and the St. Lucie Canal. Native to Atlantic slope of Central and South America. Very adaptable and lives well in variety of habitats including canals, rivers, lakes and marshes; tolerates a wide range of salinities.

The lowly catfish gets no respect. Maybe it's his habit of loafing around on the bottom of our lakes and canals. Or perhaps it's because he won't jump in a spray of aerial gymnastics. But those who don't respect Mr. Whiskers probably haven't faced the challenge of hooking a wary, angler-smart cat, or locked rods with a really big one. fishing for catfish can be as demanding as most other forms of angling. On the other hand, catfishing can also be one of the more relaxed methods of fishing - especially during Florida's lazy summer months. Whatever your desired level of challenge, fishing for catfish is worth a try.

There are several species of catfish you're likely to come across. One of the most popular is the channel catfish, stocked by the FWC in many Fish Management Areas across the state. The channel cat regularly achieves weights of over ten pounds. And the potential size is much greater - the Florida record stands at 44.5 pounds. Great baits for channels include commercial "stink baits," chicken or beef livers, cut sardines or shiners, and live worms. A good channel cat outfit is a medium spinning or casting rig spooled with 8-12 pound test line, depending on the size of the catfish you expect to encounter. However, if you're going after really big ones, line testing up to 20-30 pounds is not unreasonable. Depending on the size of fish you expect, use hook sizes ranging from 6 to 2/0 or larger. Aberdeen, baitholder and circle hooks are all popular choices for catfish, but the latter is most recommended, especially if you're not planning to keep what you catch. Circle hooks, in addition to reducing the chances of gut-hooking, may also increase your percentage of solid hookups. Baits are usually fished directly on the bottom, with an egg sinker added for casting distance if needed. However, for wary biters in more heavily fished areas, no weight at all and a relatively light line gets more hookups. Otherwise, casting your bait into the deeper areas or channels of any lake or canal will usually find fish. Some anglers also do well floating their bait just off the bottom, suspended under a bobber. Fish attractants applied to your bait will help catfish, which have a highly developed sense of smell, find your bait quickly. You can set out two or three rods, cast out in a fan pattern from your spot on the bank, and prop them up so that you can keep a close eye on the lines dangling from the rod tips. If using spinning rigs leave the bail open; anglers that use bait casters should put the reel in free-spool and engage the clicker if their reels have one. When line starts spilling off the spool or your reel starts chattering, you know a cat's just hit your bait! If using circle hooks, gradually tighten up on the line instead of using the traditional hook-set. Almost everything just stated will also apply to the smaller white catfish found throughout most of Florida. Although catfish usually won't take to the air, they will put up a strong fight - especially the bigger ones. While bass may jump and splash, a decent-sized catfish will make long, steady runs that will add a "Whoa!" to your fishing trip.

Yellow (shown) and brown bullheads are other catfish species that anglers will find throughout Florida. Sizes are much smaller, with the state yellow and brown bullhead records standing at 5.05 and 7.02 pounds, respectively. Gear should be correspondingly lighter, with a medium-light outfit strung with 6-8 pound line just about right. Baits will be similar, but with live worms being more effective for bullheads than for channel catfish. Bullheads seem to take to our man-made canals more readily than channel catfish, and may also be more readily found than channels in places where the latter are not regularly stocked.

For a true challenge, monstrous flathead (shown) and blue catfish are found in northwest Florida. State records for these behemoths stand at 69.9 pounds for the flathead, and an almost identical 69.5 for the blue. Catching these giants is a much more specialized project demanding heavy saltwater fishing gear and much larger baits, often whole live or cut fish. This isn't a "lazy" fishing trip, but both species add to the diversity of fishing to be found in the Sunshine State. 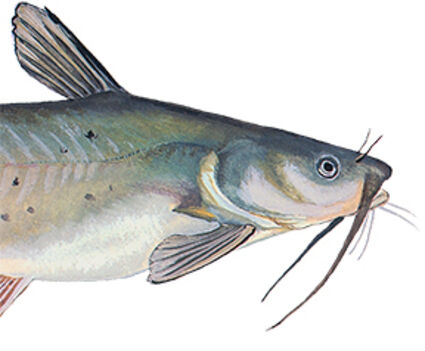 Most catfish perform well in the frying pan, and that's usually how you'll want to prepare them. Dipped in egg and seasoned bread crumbs or cornmeal, cats will fry up nicely. They have a clean white meat that serves well. Flavor can vary, and an occasional complaint with catfish is that they may taste fishy out of certain locales. Some anglers only keep smaller fish, up to only two or three pounds, claiming that they taste better than the bigger fish.

So if you haven't gone after some catfish recently, throw a lawn chair and a jug of tea in the truck and grab a package of chicken livers for an evening outing. Whether you're looking for a fresh challenge or just want to sit back and take it easy for a few hours, you might develop a new-found admiration for Mr. Whiskers!