Squad Till Travel to Wauchula Next Week Before Hosting Auburndale 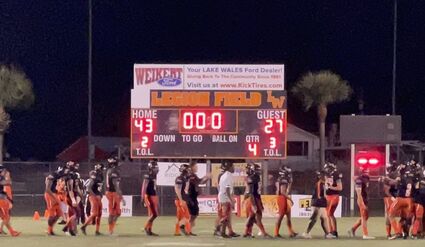 Lake Wales Highlanders file past the scoreboard at the conclusion of Friday's game. The team chalked up a 43-27 win.

For the second week in a row the local team started slowly, leading only 8-6 at the half after giving up a fumble in their own end zone. The Highlander points came on a Trent Grotjan pass to Carlos Mitchell that covered 30 yards.

The second half was a different story as the Lake Wales offense came to life. After the Commodores briefly pulled ahead, the Highlanders began reeling off touchdowns on big plays.

Grotjan connected again in the midst of the third quarter to open a 36-13 lead, this time with receiver Jaramiah Anglin Jr. That score followed an interception for a touchdown by Anglin, and a 50-yard dash to pay-dirt by RB Mitchell. Marquish Seabon punched in a two-point conversion.

Seabon also scored the Highlanders' final touchdown on a 25-yard sprint late in the game. He had averaged just over 200 yards per game of offense entering the game, and opposing defenses are focusing on stopping his big play potential.

The Highlanders' presumed principle district rival Auburndale moved to 5-0 overall and 2-0 in district play after a big win over conference rival Kissimmee Gateway. Lake Wales will host the Bloodhounds on October 15 after traveling to non-conference foe Wauchula Hardee next week.