City Commission Districts to be Re-Drawn 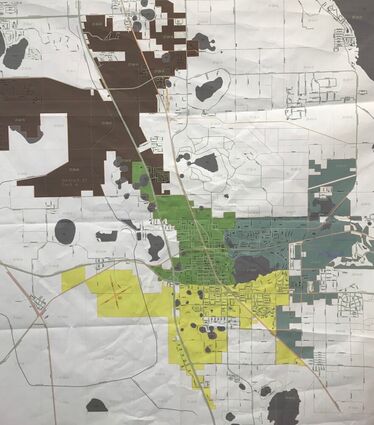 Lake Wales will likely have to tweak the borders of its four voting districts since the 2020 U.S. Census showed the city had grown by about 15 percent in the last decade.

The official census count in 2020 was 16,351 residents, up from 14.225 in 2010. In order to redraw voting district lines, a special five-person Census Redistricting Committee will be formed to suggest the new boundaries, which will then have to be formally adopted by the city commission.

The city has four voting districts. Each commissioner that represents a specific district must live within that district's borders, according to the city charter, but all city voter's cast ballots in all commission races. The mayor's seat is considered "at large", meaning the candidate can live in any of the four districts. All city voters cast ballots in mayoral races as well.

Seat 1 represents much of the southern part of the city, while Seat two encompass much of the eastern part of Lake Wales. Seat three is bisected by the U.S. 27 corridor north of Polk Avenue while Seat four covers the Eagle Ridge Mall area. An exact map of the current districts can be found online in the City of Lake Wales Document Center.

"The districting committee may establish its own procedures or methodology for completing its task,' City Clerk Jennifer Nanek noted. "The goal of the Census Redistricting Committee will be to produce a recommendation to the city commission for establishment of four geographical districts that are as equal in population as possible. Exactly how a recommendation is determined will be up to the members of the districting committee."

Each current member of the city commission is expected to nominate one person to the group later this month, with the appointments becoming official on Nov. 1.

The redistricting group has six months to come up with its proposal, meaning its work must be wrapped up by May 1, 2022. The city commission then has up to six months to approve the new voting map.

"The ordinance implementing the districting committee recommendation and establishing the new district boundaries must be adopted no later than 90 days before the 2023 election," when it will go into effect, Nanek added.