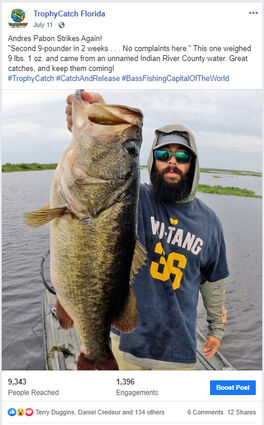 The more things change, the more they stay the same! One result from the TrophyCatch Hall of Fame 100 survey not shown above is that the plastic worm caught more HOF bass than any other lure! Despite newer lures and the fact that bass have been seeing plastic worms for over 150 years, the plastic worm is still a top bass producer. And for good reason. First, worms are easily rigged weedless, letting you reach bass a crankbait can't touch. They're also fairly economical, so when you do sacrifice a worm to a brush pile it doesn't break the bank. Finally, plastic worms are so soft that bass will often hang on to them long enough for even beginners to get a solid hookset.

Styles: There are too many worm variations to cover all of them here. However, most modern offerings will fall under either the "curly tail" or "no tail" category. The curly tail on a worm can vary from a simple crescent-moon curl to longer ribbon-tailed offerings. But you don't need a tail to catch bass. "Do-nothing" or finesse worms put plenty of fish in the boat, too. These straight or "stick" worms can be rigged and fished in the same ways as more traditional worms and may be just the ticket when finicky bass become wary of more typical offerings. These worms are usually tapered like traditional worms, but without the tail.

Rigging: The two best-known worm rigs are the Texas rig and the Carolina rig. Both work well, but the Texas rig is more popular. This involves a direct line connection to the worm hook, with a sliding worm or cone sinker in front of the worm. This is a great rig for most situations and will allow you to snake a worm in and out of vegetation, stickups, or other structure without hanging up. Use the minimum amount of weight to get the job done. In fact, when fishing floating or extremely shallow vegetation, anglers can forego the worm sinker entirely and fish the worm solo across the top of the vegetation, or just below the surface.

The Carolina rig is great for fishing a weedy or otherwise cluttered bottom. A two-to-three-foot leader is tied to the worm hook on one end and to a barrel swivel on the other. The swivel is tied to the main line, with an egg sinker ahead of it. When rigged with a floating worm, this setup will allow you to work the bottom while the worm hovers above the clutter to attract a bass' attention. Some anglers claim superior strike detection over the Texas rig with this method.

Basic techniques: One of the best things about plastic worms for beginning bass anglers is that it's practically impossible to fish a worm wrong. If there's such a thing as an "average" worm retrieve, it is probably bumping the worm along the bottom or through likely-looking cover, while allowing the worm to drop or rest momentarily and throwing in occasional twitches. Varying the retrieve will draw more strikes. Plastic worms work well for flipping, too. Although worms are nearly always worked slowly compared to other lures, you should go even slower when especially hot or cold weather slow the fish down.

Colors: You don't have room in your garage for all the worm colors out there. However, keeping it simple can still provide results. A great all-around color to start with is black. Popular second choices include red shad, watermelon, pumpkinseed, purple (grape) and motor oil. While bass definitely demonstrate color preferences, at least one of these time-tested hues will usually produce fish at any given time.

The strike: Pay attention, because a bass might hit a plastic worm at any time - while it's sinking to the desired depth, while sitting motionless on the bottom, or at any moment in between. Strikes can be hard or subtle, so keep the rod tip up and the line taut in order to best detect them. You can't judge the size of the fish by the size of the strike; a friend who caught his biggest bass - a 12-pounder - on a worm barely felt the take. If you think you're not detecting subtle strikes, examine your worm for tiny "prickle" marks on the main body indicating it was picked up by a bass. Thankfully, the typical worm strike is usually more noticeable. A sharp tap-tap-tap or your line visibly twitching or moving off to one side will tell you that you've got a customer. Lower the rod tip and then set the hook as soon as the slack is taken up by the fish. Don't wait too long to set the hook, as bass will readily swallow plastic worms and may become deep-hooked.

There are many other techniques and topics related to plastic worms that could be covered here. However, this should be enough to get any angler started down the road to catching more bass with the venerable plastic worm!