Many Visitors Travel to Event after Covid Hiatus 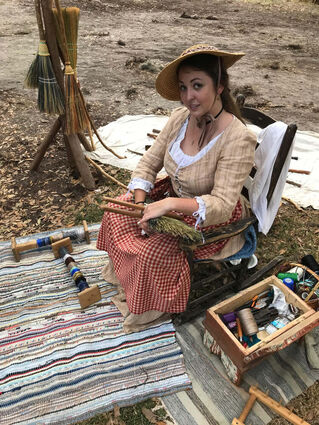 Stephanie Nevada of Lakeland demonstrated the frontier skill of broom-making, essential for housekeeping even in a primitive setting. Learning her skill required apprenticing under Glen McLean for a year, and studying at the John C. Campbell Folk School in Brasstown, North Carolina.

The 2021 Pioneer Days celebration of history is itself history, but Lake Wales History Museum Director Jennifer D'hollander is still celebrating.

"Oh my gosh yes!" she responded when asked whether she was pleased with the weekend she organized. "I was delighted!" D'hollander cited the bigger-than-ever crowds that poured into town for the annual event. "We had more marketing that ever, true, but then people are just so ready to get back to interacting at events like this." The event was advertised across central Florida from Tampa and Orlando to Sebring and the Villages after being cancelled last year due to the pandemic.

The festival, among the biggest of the year in a calendar that features several, offers visitors a chance to see and interact with people who practice skill sets used by frontier families to ensure their survival. Candle-making, blacksmithing, broom-making, wood carving, and cooking over an open fire were demonstrated and explained. Cook-wagons, tent encampments and other attractions drew crowds.

A stage schedule filled with special events ranging from the recognition of the Pioneer of the Year to a lineup of entertaining musical acts were also crowd pleasing. Hundreds purchased food from a line of a dozen food trucks and carried their meals to dine at tables inside the big tent and enjoy the music.

"We had great food vendors, most were local," D'hollander said, mentioning the great variety of offerings. 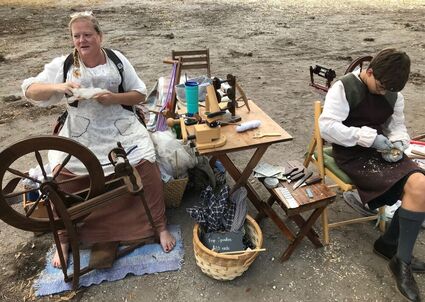 Despite the fact that a large Sunday turnout got caught short by afternoon rain, vendors and exhibitors were generally very pleased. The small committee of volunteers that work to support the event, including the Friends of the Museum, were also satisfied with the way the weekend ran.

Asked if she foresaw changes for next year's program, D'hollander mentioned the challenge of parking, since Lake Wailes Park is not served with its own parking lot. "We're going to try to come up with a better parking plan for next year," she said, though few complaints were heard about the arrangement. "Parking is something you have to create."