Prominent Eyesore Property May Be Headed For Change

Derelict Gas Station Has Been Mar on City for Many Years 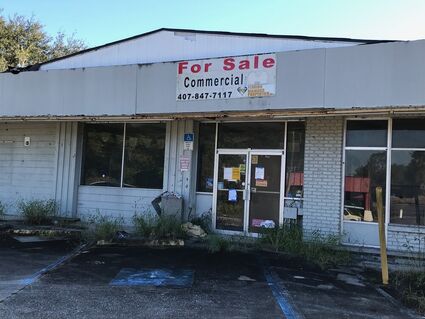 The former "Five Points Shell Station" is an eyesore that's accruing fines of $500 a day.

A crumbling former gasoline station and convenience store that has proven to be a stubborn eyesore may be subject to foreclosure action as City-imposed fines of $500 a day are mounting rapidly and surpassing the value of the property by some estimates.

The property is prominently situated at the busy intersection of Scenic Highway and Polk Avenue, Fourth Street also flanks the site at the corner familiarly known as "Five Points." Once a Shell outlet, the business closed long ago, and has since changed hands as a result of a tax-deed sale in 2015.

The property has been cited "numerous times," according to Fany Lozano, Administrative Assistant for Code Compliance for the City of Lake Wales. She read a litany of former citations against the owners, mostly for weeds and high grass growing around the fractured concrete apron of the station. Those were often cleared by city employees, then attached to tax bills as non-ad valorem fees taxes to recoup the cost, according to Lozano. They were paid each time by the property owners.

This time the issues are not so easily resolved. The City's Code Enforcement Board voted on October 11 to levy a fine of $500 per day as the building has deteriorated to the point of being unsafe. As of Wednesday, November 24 those penalties total $22,500, and the owner is making no effort to address the problems.

J & R Marketing bought the Lake Wales property in 2015 at a tax deed sale for $18,200. No work has been performed on the structure since that time. State of Florida business records list J. & R. Marketing Group as based at 7309 SR 52 in Hudson Florida. An investigation by Bryan Farrow, editor of Pasco News Online, revealed that address as the location of West Coast Diamond Realty, which changed its corporate name from Coastal Diamond Realty, Inc. in 2018. The Lake Wales property has an aging real estate sign hanging from the front listing Florida Diamond Properties, Inc. as the selling agent. That business lists a Kissimmee address.

According to state records, all the businesses have the same group of officers, including president Julio Morales, vice president Ruth Morales, and secretary Natasha Morales. All three list a single home in Hudson as their residence. LakeWalesNews.Net made several attempts to reach the listed business numbers without success. 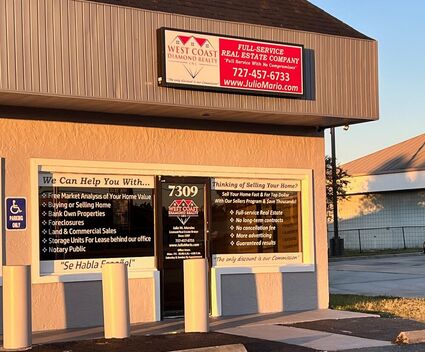 This real estate office of Westcoast Diamond Realty in Hudson is listed as the address of property owner J & R Marketing Group, Inc. Their Lake Wales property has remained an eyesore for six years under that ownership.

According to Lozano, the fines will continue to accrue until the Code Enforcement Board refers the case to the city attorney. The building could be demolished, or a foreclosure action could be filed. If successful the city could take possession, and either seeks bids to sell it, or turn it over to the Community Redevelopment Agency for future purposes, including possible direct sale. Either way, local residents and neighbors may well be delighted at the outcome. The property is located less than a block from an innovative "pocket neighborhood" being developed by urban planner Victor Dover and his wife, architect Maricé Chael. The Coral Gables couple are investing in Lake Wales, describing it as an opportunity. He has said that he has "great faith" in the future of the community.