Highway Will Connect SR 60 With 17-92 Near Davenport 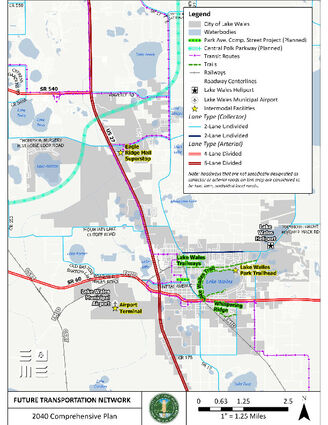 The proposed route of the new Central Polk Parkway winds through the northwest portion of Lake Wales to connect SR 60 and 17-92.

Population growth on the US 27 corridor has led transportation planners to plot the future course of an "alternate" route that will parallel the busy inter-regional highway. The proposed limited-access toll expressway will thread its way around the west side of Lake Wales before crossing US 27 near the north city limits to run along the Ridge east of Dundee and Haines City.

Planning maps released by the Polk Transportation Planning Organization, a multi-agency body which includes Polk County and most of the larger municipalities, show the route of the corridor passing east of Lake Ashton and west of the Eagle Ridge Mall area before crossing US 27 north of Pedaler's Pond and south of The Parc at Lake Wales. That development will feature 480 apartment units at the southeast corner of US 27 and Waverly Road.

Ryan Kordek, Planning Administrator for the TPO, emphasized that the roadway route is still preliminary, and could be changed by further studies. "It's long-range, long term planning" in anticipation of the expected residential growth along the Ridge, Kordek said. 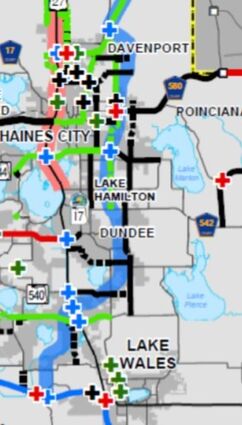 The Central Polk Parkway (in blue) is intended to relieve traffic congestion on busy US 27.

The preliminary roadway route also crosses the west side of the expansive, and as yet unnamed, development proposed by the private Winter Haven Corporation on some 1500 acres south of Thompson Nursery Road and west of US 27. Lake Wales Development Services planners expect to receive proposals for as many as 6,100 residential units on that site in coming months and years.

Kordek said that the route depicted on the current maps is based upon preliminary environmental studies that were performed about ten years ago. He predicted that the Florida Department of Transportation will continue to slowly advance design work on the project, which is expected to include an interchange at the US 27 crossing.

The future connection point on SR 60, west of Lake Wales, has also not been determined, and could be complicating design for a long-expected bridge over CSX railroad tracks there, according to Kordek.