Project Would be Transformative for City Center 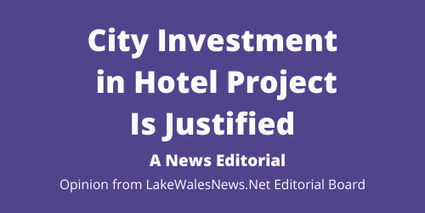 Symbols of Success and Failure

Long recognized as the dominant symbol of downtown Lake Wales, the eleven-story Walesbilt Hotel is now among the dominant topics of conversation in the city.

Opened with great fanfare in 1926, the hotel has seen good times and bad. It fell victim to the Great Depression in its infancy, hit its hey-day during World War II, and was last renovated in 1972. Vacant since 1995, it's been abused, stripped of its prestigious furnishings and trim, and sometimes wished into oblivion. Yet it has endured as a symbol, for good or ill.

Solidly-built and touted as fireproof, the building has finally drawn the attention of serious developers who can see potential where many city residents may not. Boutique hotels in historic buildings have become very popular with upscale travelers. Major chains are placing their flags on buildings like the Walesbilt. The decades of success exhibited by Lakeland's Terrace Hotel, now a Hilton Tapestry Collection property, is an example of the impact they bring to host cities.

In what may be a once-in-a-generation opportunity, a powerful team of hotel managers and operators have proposed to make the Walesbilt their own and place a luxury flag on it. That would be a multi-million dollar investment, and an undeniable game-changer for the city, raising property values, filling the streets with visiting diners and shoppers, and attracting other investments.

Renovation of the hotel aligns perfectly with city plans to invest $18 million in downtown streetscapes and other infrastructure. Conversely, the glaring failure of a vacant hotel could undermine those efforts.

The City of Lake Wales has an interest in the property, having assigned the title to owner Ray Brown and witnessing years of frustrating inaction. With time running out on the "statute of repose" the commission is threatening a lawsuit to recover the title.

Yet does the city truly wish to become the owners of the property?

It's easy to play a game of what-if. Perhaps no other deal will appear on the horizon, and the city would own the property for years to come. In that case, success in a lawsuit would bear bitter fruit indeed.

For the developers, success of the proposed hotel project requires reaching agreements not only with the host city, but with the financiers who will be on the hook.

The developers have submitted a wish-list of hoped-for contributions from the city and the Community Redevelopment Agency. Some are reasonable, while others are not. Among them is participation, at least, in the construction of a parking garage, which could readily serve downtown shoppers and diners as well as hotel guests. It's likely to be needed anyway if downtown revitalization succeeds. Compared to the planned million-dollar contribution from the CRA to the Housing Authority and $900,000 pledged to a downtown business incubator, it is not beyond reason to consider such an investment if it triggers a further multi-million dollar investment of private capital.

The years of economic upturns and downturns should remind us that opportunities can be fleeting. Recognizing the value of "a bird in the hand" should be enough motivation to keep this opportunity alive.