Downtown Property Redevelopment on the Upswing

Investors "Decided to Be Part of the Change" 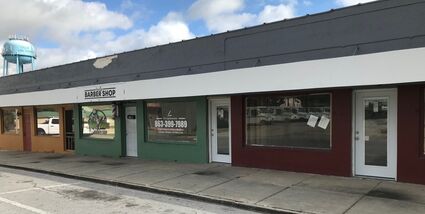 This block of retail units facing North First Street could again offer restaurant choices after completion of renovations being planned by new owners Tammy and Stephen James, who acquired the property Monday, adding to their prior purchase of the adjacent Friedlander Building..

Downtown Lake Wales is seeing a significant uptick in property transactions that some see as the result of ambitious street renewal plans being advanced by the Lake Wales Community Redevelopment Agency. The CRA plans to invest some $18 million in renovations across a wide swath of the historic city center.

In the latest transaction Monday, investors Stephen and Tammy James have acquired four additional parcels from the Park Avenue Building Company. The couple had purchased the historic Friedlander Building at 101 East Park Avenue, the corner of Park and First Street in January. That art deco structure sold for $369,000, according to public records.

Their new properties include a block of buildings facing First Street as well as Orange Avenue. They plan to completely remodel all the structures with plans to create residential apartments upstairs. They are also seeking restaurant tenants.

"We've already had an unbelievable response from community entrepreneurs who share our vision to bring that building back to life," said Tammy James. "We look forward to working with the Chamber, the city, the CRA and Main Street to make the Connected Plan real."

"We think there's a tremendous amount of potential for downtown, and instead of just sitting around waiting for something to happen we decided to be part of that change," Stephen James said. "We don't think people should have to go to neighboring cities to avail themselves of amenities like restaurants."

Tammy James echoed her husband's comments, saying that "the vision is to create a little 'foodie corner' that will set the tome for downtown," adding that they have already received multiple expressions of interest in opening food-service operations there. "We have spoken to our architects about creating a second floor above the present buildings that will feature an open-air dining terrace." Also in the plans is the creation of a completely new façade on the block to mimic the Art Deco style of their adjacent Friedlander Building.

Less than two blocks away at 244 East Park Avenue, a 1916 department store building is being restored to its original design by attorney Robin Gibson, who also chairs the CRA. The process involves removing a layer of stucco boards from the façade to re-open the original broad windows to the street.

Gibson intends to make the building available as retail or restaurant space, while second-floor apartments are "under consideration," Gibson told the LakeWalesNews.Net.

In between, the Lake Wales Care Center is presently performing a cost analysis in consideration of creating housing for interns who work in support of their programs. Seven or more one-bedroom units may be constructed above Kathryn's Books and Gifts at 205 East Park Avenue.

Increased downtown residential opportunities were recommended in the Connected plan in order to provide a more reliable customer base and an increased perception of safety. 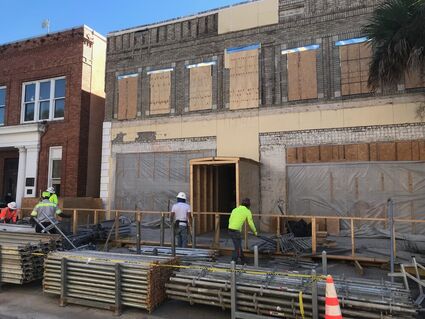 This 1916 former department store on Park Avenue is presently undergoing renovation under the ownership of Robin Gibson. "Under consideration" is the build-out of residential units on the second floor.

In January the CRA completed the purchase of the three-story Seminole Hotel on First Street and is currently seeking proposals from those interested in redeveloping the property. A mixed use including retail and apartments is expected for that building's future.

James said that he sees a bright future for a downtown that will be transformed by the Lake Wales Connected plan, and he expects other investors to step forward to restore historic buildings. "While there are risks involved, we think it's worth the risks to be invested in our community."