School Would Co-Locate on Campus of McLaughlin Middle School

McLaughlin Middle School may become the location of a companion high school if Polk School Board plans come to fruition.

A second public high school for Lake Wales moved a large step closer to reality last week after Polk County Schools Superintendent Frederick Heid proposed that McLaughlin Middle School campus be used to house new facilities and purposes to provide "continuity" for students there to transition straight to high school with their peers.

"Any time we can remove a transition between school levels for students, the students benefit, the school benefits, the staff benefits, because those students become a known commodity," Heid said.

Speaking to the Polk County School Board at their regular meeting, Heid noted that the Lake Wales community "is growing" and suggested that the board "have a conversation about McLaughlin Middle and its potential of expanding its grade level."

Heid also suggested that the expansion to accommodate upper grades be conducted gradually by adding one grade over each of four years. The school currently serves sixth, seventh, and eighth grades.

Heid noted that the expansion would require a multi-million dollar expenditure to construct a new auditorium and gymnasium. The school currently operates with significant excess capacity, so existing classroom space would be used for the new school.

Anticipated growth in the Lake Wales area is expected to require the construction of at least two new elementary schools in the coming years, according to City of Lake Wales Development Services Director Mark Bennett. Bennett had also previously forecast the need for a second high school.

Polk School Board members were generally enthusiastic about the proposal, with board member Sarah Fortney proposing that the board add the item to the evening agenda to be approved immediately so that principal Deborah Wroight Hudson could begin recruiting staff for the coming school year. Other members also spoke in favor of the change but asked for a public meeting to receive comments before proceeding.

McLaughlin Middle School has recently raised it grade from a D to a C, and the school has received a $50,000 grant from Duke Energy to establish a call center program for students, which could lead to careers with the company in the field of energy management. Heid has offered to open that program to Lake Wales High School students, an olive branch toward the Charter School system. 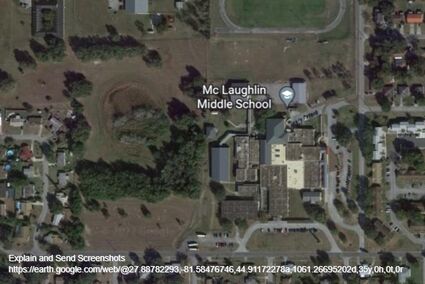 The decision by five Lake Wales schools to split from the Polk Schools system to create the Lake Wales Charter Schools generated friction that has taken nearly two decades to subside. Both the Polk and Lake Wales systems are under new leadership. Heid was hired as superintendent last year. Dr. Wayne Rodolfich will take the reins at the Charter School system in June.

The nearly 38-acre campus of McLaughlin borders on Winston Avenue and South 4th Street. It is valued by the Polk property appraiser at more than $15 million. It features a running track which could possibly be converted to a sports stadium site. The western portion of the campus includes a small wetland area which some have suggested could become an outdoor environmental classroom.