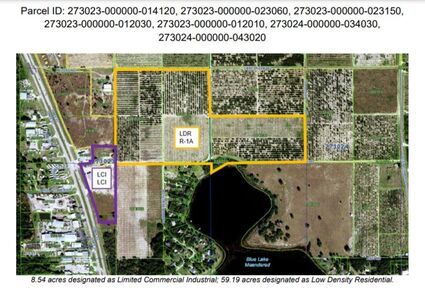 The initial proposed zoning of the property will be primarily low-density residential (LDR), with a linear commercial designation for an area of highway frontage which is largely developed as such.

The steady expansion of city limits is expected to continue at Tuesday's Lake Wales city commission meeting when the board will consider the annexation of 67.73 acres of land south of Lake Bella Road and east of US Highway 27.

The property lies at the extreme southern tip of the municipal limits, and will bring those limits into contact with Blue Lake for the first time.

Property owners and applicants for the annexation include Rama Food Mart LLC, Mckenna Brothers Inc, Hunt Bros Inc, E N C Inc, and Ronald McCall, according to a package presented to commissioners by staff at an agenda workshop meeting.

The owners originally petitioned for annexation in late 2021.

The Zoning Advisory Board is proposing that the property be limited to low density residential (LDR) mapping for future development purposes, except for an area near US 27 that already contains commercial activity, including a truck stop and Heath Corporation, a metals manufacturer. A request to expand that non-conforming use was twice denied by the ZAB.

The annexation will open the door for likely addition of Blue Lake itself, considered "meadered Florida waters," allowing the city to "leapfrog" to parcels lying to the south along Alturas-Babson Park Cutoff Road, commonly referred to as ABC Road. Properties along that road have been proposed for development and would benefit from obtaining city water and sewer utilities. 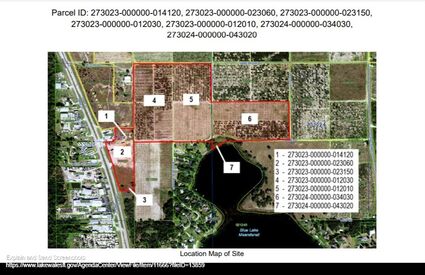 The several properties being annexed belong to several different property owners. No specific projects have been proposed for the site so far.

Last year the City of Lake Wales completed the acquisition of the Park water Company, which serves the South Lake Wales area, and is refurbishing the existing water tower there after completing water and sewer "interconnects" with the main city systems.

Among the largest tracts to the south of ABC Road that might be considered for annexation are multiple parcels totaling more than 300 acres owned by Atlantic Funding, Ltd., LLC, a Nevada corporation. That land extends to the northern shore of Crooked Lake, which purchased the property in 2015.

Crooked Lake itself has already been annexed by the Town of Hillcrest Heights, which was perceived as a defensive measure against aggressive annexation activities by the city of Frostproof.