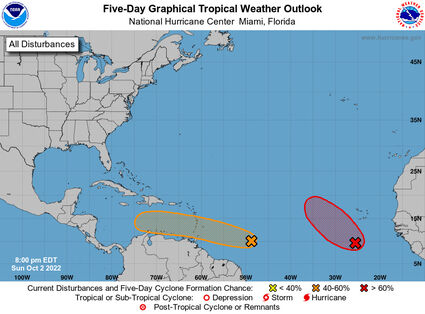 Two new potential tropical systems are being monitored in the Atlantic basin, which is experiencing water temperatures far above normal values. Storms and hurricanes are fed by warm waters and saturated air.

Unwilling to relax and call it a season, some Florida residents are keeping a close eye on the tropics as some models show a continuing parade of tropical waves moving off Africa and marching across the Atlantic. Unusually warm water temperatures across the basin are continuing to sustain the potential for development. 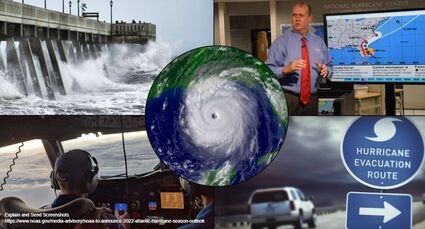 National Hurricane Center meteorologists uses a variety of tools, including NOAA satellites, hurricane hunter aircraft, and modern flying and sail drones to decipher the strength and structure of tropical systems.

The Lake Wales area has enjoyed delightful fall-like weather in the aftermath of the passage of Hurricane Ian, which brought up to two feet of rain and high winds to the area last week. Morning lows into the low 60's and daytime highs in the 80's have been a pleasant change from months of sweltering summer heat, but the National Hurricane Center in Miami is reminding residents that the official Hurricane season does not end until November 30, and that storms are possible even after that date.

As the first full week of October got underway forecasters are monitoring at least two new disturbances, one of which is projected to continue to move west, reaching the Caribbean by next week. Meteorologists are giving the system a 40 percent chance of developing into a tropical cyclone. A second system is expected to take a more northerly track.

As repairs and cleanup are continuing, residents are urged to remain prepared for adverse weather at all times, and replenish depleted emergency supplies.