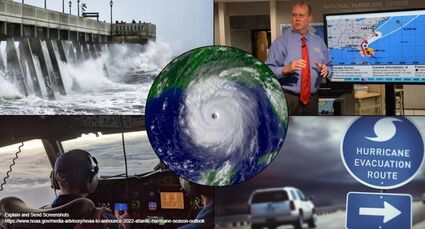 Despite the arrival of dry autumn-like weather, unseasonable warmth has left the door open for possible tropical storm development, and forecasters are now keeping an eye on the potential for a rainy, windy spell for the state of Florida.

For several days long-range weather models have been depicting a new low forming over the northeastern Caribbean and south-west Atlantic before drifting over the Bahamas and approaching the east coast of Florida.

That path alone would make the storm unusual, as would its late-season formation. Hurricane season officially ends November 30 but increasing Atlantic and Gulf water temperatures have been providing fuel for longer seasons.

If development occurs it is likely to linger, according to forecast models, with some showing a low crossing the Florida peninsula and looping aimlessly in the eastern Gulf. That scenario would lead to days of rain, unseasonable warmth, and breezy conditions.

An alternative scenario bring the low northward along the Florida East Coast toward the Carolinas, which would usher in northerly winds and cooler temperatures for Florida, similar to what occurred after the passage of Hurricane Ian in early October.

In either scenario, it is expected that increasing winds and rain will reach the Lake Wales area by Tuesday or Wednesday.