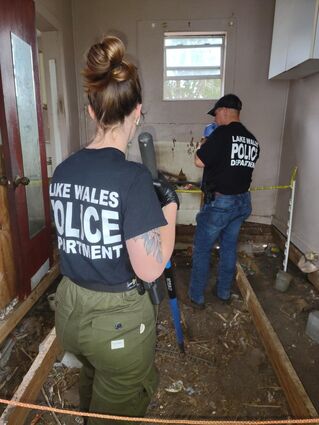 Police officers excavated under the foundation of a home on Wiltshire Avenue in an attempt to locate possible human remains after two cadaver dogs alerted to the location.

The solution to a missing persons case that has festered for years remains our of sight for investigators after an excavation under the floors of an aging home of Dr. J.A. Wiltshire Avenue turned up no remains.

The home was the focal point of years of rumors after 24-year-old Debbie Williams was reported missing by family members in 1990. Her daughter Tamesha, then about nine years old, was subsequently raised by her grandmother. She has never had closure in the matter of her mother's disappearance.

A search of the ground around the home had been conducted by cadaver dogs from the Peach River Search and Rescue team two weeks ago, and two different dogs alerted to possible remains.

Debbie Williams was 24 years old when she went missing in 1990. The mystery has long confounded local law enforcement officers, and those who took part in the initial investigation.

City manager James Slaton ordered police to make the investigation a top priority, and arrangements were made to remove the current residents' personal belongings from the house in order to remove flooring to allow the digging to proceed.

According to a statement issued by the Lake Wales Police Department, "Lake Wales officials intend to continue the search. Plans include the use of ground penetrating radar (GPR). Proposed areas for the use of GPR include the lot the residence is located on and an additional area alongside US HWY 27. Detectives have partnered with a GPR specialist from the University of South Florida."

City authorities had nothing but gratitude toward both the residents and the owner of the home, who have cooperated and allowed the work to go forward. As a preliminary step, engineers has verified the structural stability of the home to assure that there would be no danger of a collapse that could endanger officers.