Penalties and Mistakes Left the Game in Question After Three Quarters

Lake Wales escaped a toughened Auburndale Friday night to advance their playoff hopes. After losing in the regular season by a 41-0 score, Auburndale stepped up their game in a tough 34-10 loss that was closer than the final score indicates.

The top-seeded Lake Wales Highlander Football team advanced their 2022 playoff hopes Friday night at Legion Field with a decisive 34-10 victory over the eighth-seed Auburndale Bloodhounds, making a small step forward to their season-long goal of a state title that has proved elusive.

The Highlanders have advanced as far as the championship game in past seasons, but never brought home the trophy. Their hopes are riding high this year on the strength of their undefeated season, but those games are meaningless in the all-or-nothing playoffs.

After losing a previous meeting by a score of 41-0, Auburndale tried tricks to equalize, including opening the Regional quarter-final game with a successful onside kick. They also put up a much-improved defense against the Highlanders' air and ground attacks, including a pick-six that put the outcome in question after three quarters.

The Bloodhounds were plagued most of the night by short punts as the Highlanders frequently held them on downs. The Highlanders in turn were hampered by penalties ranging from offsides to late hits and unsportsmanlike conduct. Some came as a result of their swarming defense not stopping at the whistle on gang tackles.

Throughout the game the Highlanders defense often left the Bloodhounds in third-and-long situations. The Bloodhounds' best first-half drive came as a result of scampers by QB Amari Turner on keepers.

The 14-0 score at the end of the quarter reflected the strength of the Highlander defense, but from there the local squad spent two quarters struggling to find their rhythm.

Jerimiah Anglin picked off a third Turner pass to stifle the Bloodhounds best first half drive with 38 seconds left on the clock.

Bloodhound running back Dayrel Glover was their most successful ball carrier, setting up their 40 yard field goal in the third period. That was followed by another Bloodhound onside kick, but Xavier Marlow snagged the bouncing attempt .

Much of the third period was consumed by an exchange of short drives and punts before a completed Auburndale pass resulted in a fumble recovered by the Highlanders, but the very next play saw a Bloodhound pick-six that closed the margin to 14-10 with a minute left in the quarter.

As the tension rose, the decisive quarter began with the Highlanders in possession at midfield but unable to advance the ball. Penalties again factored into the stall. After an exchange of punts the Highlanders got the ball back at the Auburndale 47.

After the following kick traveled into the end zone, Auburndale started deep, but promptly fumbled, setting up the Highlanders at the 14, but three unsuccessful plays saw a frustrated Lake Wales eleven backed up to the 20, where they missed a field goal.

Eager to get back in the game, Auburndale's Turner tossed a long pass on their next possession, but after a hard hit by defender Pierson Kell the ball popped into the hands of Carlos Mitchell, who reached pay-dirt on the next play on a pass from Grotjan. Mitchell was flagged for taunting after his untouched score, but the play stood.

After the penalty left the Highlanders kicking off from their own 25, the bouncing kick from Mauricio Alvarez eluded the receiver, who finally tracked it down but was tackled at his own 15 with 3:25 left. After no gain on the set of downs, a punt put the Highlanders in control at the Bloodhound 30. 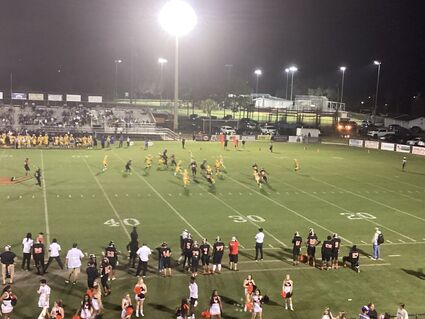 The excitement and pageantry of high school football was on display at Legion Field during the first-round playoff game Friday night. The Lake Wales Highlanders will host Ocala Vanguard on November 18 at 7:00 in the Regional Semi-Final game.

As fans expected Grotjan to take a knee and let the clock elapse on the 27-10 score, he instead tossed a bomb to Marlow for a final score with 13 seconds left in the game. Alvarez kicked his fourth PAT for the final score of 34-10.

Only about 200 Bloodhounds fans made the trip from Auburndale to watch the playoff game.

The Highlanders will host fourth-seeded Ocala Vanguard in the Regional semifinals next Friday at Legion Field. All playoff games have been moved to 7:00 starts by the Florida High School Athletic Association.

Vanguard, always tough, won their quarter-final game against New Port Richey River Ridge by a score of 35-0, after qualifying for the playoffs after an 8-3 season that included a 68-0 win over Gainesville. Vanguard eliminated Lake Wales from the Regional playoffs by a 24-13 score last year, giving the Highlanders extra motivation this season.