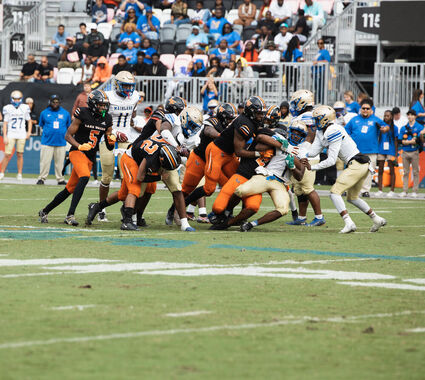 The Highlander defense played a huge role in Friday's victory in the state championship game, holding the dangerous Daytona Mainland offense when the chips were down.

The Lake Wales Highlanders have completed a perfect 15-0 season with a 32-30 win over Daytona Mainland to win their first state championship.

After falling behind early by a 10-0 score, the Highlanders battled back to open a 32-23 lead late, before the Daytona Buccaneers scored to pull within two. The Highlanders defense played a major role in the game with three interceptions, including two by Phillip Davis that ended a Buccaneer drives on the Highlanders' one and two yard lines.

In a game that will be review hundreds of times, The Highlanders overcame a slow start and costly penalties to emerge on top. The Highlanders were tagged three times for offsides on kickoffs, and one single play resulted in two penalties that cost them a gain and 25 yards.

Quarterback Trent Grotjan matched the Buccaneers' vaunted Quarterback Damarcus Creecy, who proved elusive, but in the end failed to break the big running plays on keepers. Grotjan ran in one Highlander TD himself.

Initial Highlander touchdowns came from a short pass from Grotjan to Carlos Mitchell for the first TD from the 25, followed by a Grotjan burst left from the one yard line, and. In both cases Xavier Marlow ran for two-point conversions, which provided the winning margin.

The Highlanders stopped the Buccaneers opening drive at the one-yard line, leaving the score 3-0 at the end of the first quarter. It was soon 10-0, and the Lake Wales team realized that they needed to get to work. That call was answered by Mitchell's reception and dash to the end zone. Marlow's two-point conversion left the score 10-8 at halftime.

A second-half field goal by the Highlanders' kicker Mauricio Alvarez also provided essential points. Alvarez was a perfect 7 for 7 on field goals this season.

Big plays were the order of the day, as Jeremiah Anglin returned a kickoff 40 yards. A Grotjan-to-Mitchell catch-and-run covered 53 yards for a score.

Lake Wales took the opening kickoff of the second half the distance, gaining the lead for the first time.

The momentum seemed to shift multiple times during the second half, leaving fans gasping for breath with the quick changes of fortune.

After turning the ball over on downs deep in Daytona territory, it took the Buccaneers only two plays to put the onus back on Lake Wales. Carlos Mitchell blocked the Buccaneers' conversion kick, leaving the score knotted at 16 in the third quarter.

Landrum then put the Highlanders back on top with his 23-yard run.

Harris's keeper late opened up the Highlanders' only two score lead, seeming to put the game on ice with only 3:34 on the clock, by Daytona wasn't done scoring, and a huge pass play to the Lake Wales 10 set them up to close the gap to two points with only 2:16 left to play.

The Highlanders failed to advance the ball after recovering an on-side kick and were forced to punt. After taking over at their own 10-yard line, the Buccaneers knew that it would only take a field goal to win the championship, but the Highlanders defense stepped up again, preventing the big play while allowing Daytona to finish running out the last 19 seconds on the clock.

The Championship was the first for Lake Wales after numerous runs since the 1960's. They were runners-up in each previous attempt. Lake Wales fans are undoubtedly planning a celebratory parade, and LakeWalesNews.net will be providing details as they are developed.