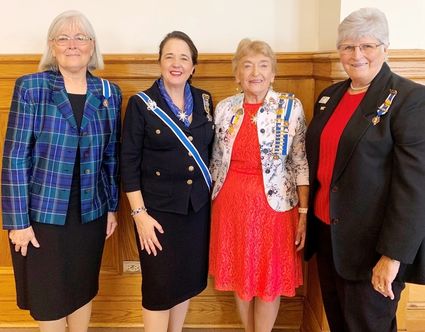 Three Polk County chapters of the Daughters of the American Revolution joined together to host a visit from Florida DAR State Regent Dawn Lemongello in January.

Lemongello inspired the 50 DAR ladies with her talk on "Chapter Leadership and Development." She also administered the oath of membership to four new DAR members from the three chapters and learned about a member's granddaughter who received a $1,500 scholarship from Florida State DAR. Jeanne McMillan, state chaplain for Michigan DAR, was a surprise visitor.

Box luncheons were catered by Sweet Magnolias Café in Bartow; cookies were decorated to look like the State Regent's Sunshine Grow pin.

After the meeting, Head escorted State Regent Lemongello to several locations in Lake Wales, including Bok Tower. Spook Hill School was their first stop because Florida DAR had given them $1,300 to replace microscopes and school supplies lost during hurricane Irma in 2017. They also visited with Mary Zipprer, a 102-year old retired school teacher who has been their DAR chapter member for 78 years. State Regent pinned her Sunshine Grow logo pin on her.

This was the DAR State Regent's first visit to Polk County, and she was so impressed that she plans to bring her family another time and spend a weekend sightseeing. It was an exciting day and a great way to launch a new year for the three Polk County DAR chapters.