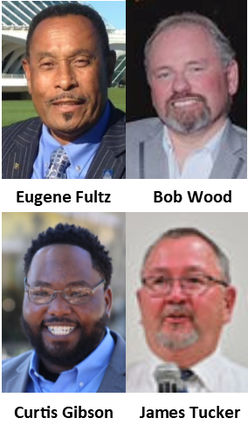 Lake Wales City voters have their final opportunity to vote for the mayor and one city commissioner from 7 a.m. to 7 p.m. on Tuesday, April 2. Voters also are being asked to change the City Charter to increase the mayor's and commissioners' terms from two years to three.

Incumbent Mayor Eugene Fultz is being challenged by Bob Wood, who ran unsuccessfully for a city commission seat in 2016. Political newcomer James Tucker is challenging incumbent Commissioner Curtis Gibson for Seat 2, which he first won in 2017.

One week out about 35 percent of the city's more than 9,500 registered voters had requested a ballot to vote by mail. But about 3,200 of them are on Supervisor of Elections Lori Edwards' list to automatically receive a ballot in the mail. Those ballots were mailed out March 8.

If history repeats itself a large number of them won't mail that ballot back in to be counted. Ballots must arrive in the Supervisor of Elections office by 7 p.m. election night. Edwards tried to increase mail-in voters by sending out a letter encouraging voters to request vote by mail ballots, but only about 200 voters responded.

Edwards also reminded City voters who have changed their names or residences since the last election to notify her office of their new address.

"An address change may mean a voter has moved into or out of the city limits, an important detail in a City election," explained Edwards. "If a voter updates their record before the election, we can eliminate inconvenience on Election Day."

The proposed Charter change would take effect this year for the mayor's seat and in 2020 for the rest of the commission seats. The winner of Seat 2, being filled this year, will serve two years. City officials said three-year terms would allow a Commissioner more time to learn about how the government of the City of Lake Wales functions which will better inform voting decisions regarding goals and policies of the City and its citizens. They also say the extended time provides for more stability in city government. A majority of the five-person commission would no longer be up for election in any one election year. A new majority could still be brought to office, but it would occur over two elections, thereby giving the electorate a better opportunity to evaluate drastic change. Three-year terms would allow a Commissioner to go through the entire budget cycle, planning it, implementing it, and its audit. This will allow voters a better opportunity to gauge whether or not a Commissioner is effective and/or shares the same goals.

In past municipal elections, the city administration building was the only polling location. In an attempt to increase voter turnout, city officials added a second polling site; those in precincts 519, 524 and 526 will vote at the Lake Ashton Clubhouse, 4141 Ashton Club Drive. Those in precincts 523, 527, 528, 530, 531 532 and 542 will still vote at the municipal administration building at 201 W. Central Ave.

For more information on candidate views, see the story on AAUW candidate forum at https://www.lakewalesnews.net/story/2019/03/13/news/city-candidates-express-views/298.html

The 2019 Lake Wales City election for three of the four candidates has been fairly low-key and low-budget.

As of the March 15 reporting deadline Mayor Eugene Fultz had raised $900 and spent about $532. His challenger Bob Wood had spent a little under $500 of the $775 he had raised.

During that same period newcomer James Tucker reported contributions of $825 and expenditures just under $490, compared with incumbent Commissioner Curtis Gibson’s spending about $2,100 of his $4,425 in campaign donations.

All four candidates put out campaign signs and attended community events. Tucker and Wood also reported buying literature to hang on the doors of potential voters.

The majority of Gibson’s expenses went to print and mail brochures to citizens who requested vote by mail ballots and a targeted group called “supervoters,” who consistently vote in most elections.

“The best way to reach potential voters is to send information directly to their homes,” Gibson said. “I am thankful that my supporters enabled me to tell voters what I stand for and what I hope to focus on during the next two years.”