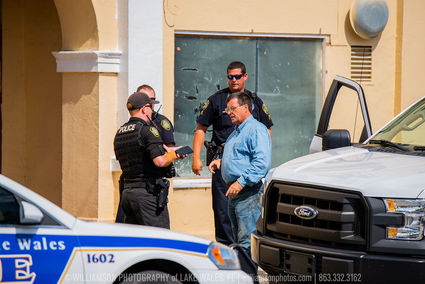 City of Lake Wales officials continue to restrict access to the condemned 1929 Seminole Hotel in downtown Lake Wales to the frustration of developer Ray Brown.

A code enforcement officer and three police officers met Brown at the site Tuesday, April 30 and threatened him with arrest for trespassing if he entered the hotel building. Brown says he has a contract to purchase the hotel and notarized permission to enter by the current owner.

Brown was there Tuesday to meet senior project manager Darrin Engel and assistant Brian Lara, who work for Brown's partner Rick Gonzalez of REG Architects of West Palm Beach. Gonzalez's firm has extensive experience restoring historic buildings and he serves as vice chair of the Florida Historical Commission. Engel and Lara arrived later than expected because of a traffic tie-up on SR 60, but ultimately were granted access to the hotel. Brown was not permitted to join them as they assessed the hotel's condition.

Also denied access Tuesday were a reporter and photographer for LakeWalesNews.net, both of whom provided the city with notarized liability waivers.

City Manager Ken Fields and Director of Planning and Development Kathy Bangley said the building is unsafe and they are allowing only two people at a time into the building and only professionals who are there to assess its condition for possible redevelopment. Bangley said Brown needs to respect the city's rules and should not be passing out liability waivers to other people.

Brown and Gonzalez are approved to enter the building May 7. That will be Gonzalez's first visit to the hotel, which was condemned in December 2017 after numerous code violations. The city also placed a lien on the building with administrative fines of $250 per day, which now exceeds $100,000, according to Bangley.

Brown also is in the process of restoring the historic Walesbilt Hotel, which he says has been slowed by city officials, who have issued stop work orders and publicly criticized his progress. He started work on the Walesbilt in 2010 and took ownership from the City in 2011 after demonstrating he had spent $1.5 million on the restoration. He says he now has a full design plan and is finalizing financing.

Brown said with the Seminole Hotel's owner's permission he fixed the back gate, paid for a dumpster and scheduled workers to remove debris so professionals could have easier access to take measurements and create a development plan. According to photos produced by the city, the hotel is full of trash and abandoned belongings left behind by former tenants, who moved out when the building was condemned.

"I would have cleaned it out, but I'm not allowed to execute my plan," Brown said.

Brown said his architects and contracting professionals are better suited than code enforcement to determine whether the building can be restored or has any potential to collapse or endanger the public.

The city's urban design consultant Dover Kohl, which is working on a redevelopment plan for historic downtown and the northwest business district, included in their public presentation a rendering of a restored Seminole Hotel, citing the need for more housing in the area. 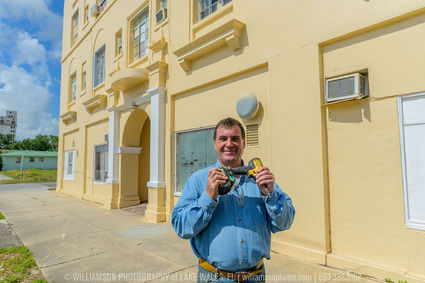 "Across the board I've had everybody tell me we need more housing, every segment," Brown said, noting he envisions creating efficiency apartments at the Seminole, which he believe would be attractive to students at nearby Polk State College and possibly senior citizens. "Realtors say they don't want to rent a whole three-bedroom house to students, who may be transient. There is a great need for more housing in Lake Wales."