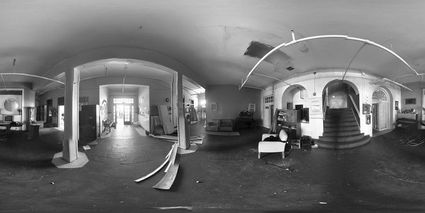 The historic Seminole Hotel in Lake Wales is in "good condition and solid enough to restore," according to Architect Darrin Engel, who has more than 30 years' experience in historic building restoration.

A senior project manager with REG Architects of West Palm Beach, Engel did a walkthrough assessment April 30 along with his assistant, Brian Lara.

"I've been in some very dangerous buildings that do require care but that is not one of them," Engel said. "I was comfortable walking around in it."

The Seminole Hotel was condemned by the city in December 2017 after a lengthy battle over multiple code violations against current building owner Howell Cardiff Trust in Orlando. City Director of Planning and Development Kathy Bangley is pursuing demolition of the building, which she anticipates could cost the City upwards of $100,000. The City placed a lien on the property and has been charging the owner $250 a day in administrative fines, which now exceed $100,000. Bangley said that lien would follow the property to any future owner.

Developer Ray Brown says he has a contract to purchase the Seminole and notarized permission from the owner to enter the hotel. He has enlisted as a partner Architect Rick Gonzalez of REG, who has extensive experience with historic building restoration and serves as vice chair of the Florida Historical Commission. Gonzalez plans to tour the Seminole with Brown on May 7.

City officials refused to allow Brown to enter the building Tuesday with Engel and Lara and have blocked his efforts to get inside to clear out debris to make it easier for professionals to take measurements and create a development plan. They also refused to allow a reporter and photographer from lakewalesnews.net to tour the building, even though they signed liability waivers.

Engel said he didn't know what to expect on his first visit to the Seminole. After his visit he posted photos on Facebook showing an updated electrical system, sprinklers and modern fire alarms and he said "all that safety gear was not needed . . . I was wearing my steel-toed boots, but really could have worn my flip flops."

Engel called the Seminole "a nice historic hotel with original layout mostly intact including lobby, front desk, skylight lit dining and massive kitchen with food prep area." He said even without air conditioning the natural ventilation with transoms above doors kept it cooler inside than out. He said the hotel has good air quality, no evident mold and original plaster walls that are in good shape.

Declining to discuss the city decision to block access to the Seminole, Engel said he believes professionals with design or construction experience would know what to look for and how to safely visit the building: "I have to admit I never felt like I was going to fall through a floor."

Bangley and City Manager Ken Fields are relying on the advice of City Attorney Chuck Galloway, who says just signing a liability waiver isn't enough protection for the city.

Engel said he did see water damage and the building would need minor repairs, new paint and some interior decorating.

"I specialize in historic projects," Engel said noting he studied building trades in high school and started restoring old cottages in Wisconsin. He continued his studies in urban planning and architecture and has hands-on experience restoring Victorian homes built between the 1870s and 1890s. Bangley has a bachelor's degree in social sciences and a master's in public administration.

Brown is in the process of restoring the Walesbilt, but has met with city resistance, including stop work orders and criticism by city officials about his progress. 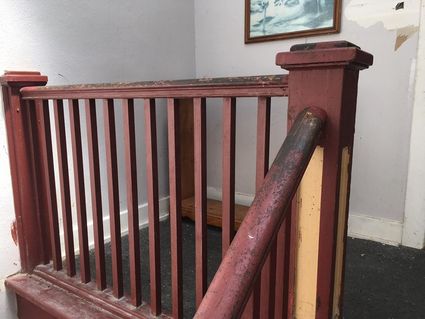 The city's urban design firm, Dover Kohl, included a rendering of a restored Seminole Hotel in its public presentation in April, which called for more housing near downtown Lake Wales. Brown plans to convert the Seminole into studio apartments, which he says should be attractive to students at nearby Polk State College and possibly senior citizens.