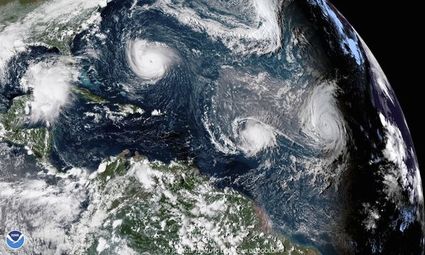 The 2019 Atlantic hurricane season kicks off Saturday, June 1, so the state of Florida is encouraging residents to stock up on supplies during a special sales tax-free period May 31 through June 6.

The National Oceanic and Atmospheric Administration is predicting a "near normal" hurricane season with a total of nine to 15 named storms. NOAA predicts four to eight could become hurricanes and two to four could become major hurricanes.

"With the 2019 hurricane season upon us, NOAA is leveraging cutting-edge tools to help secure Americans against the threat posed by hurricanes and tropical cyclones across both the Atlantic and Pacific," said Secretary of Commerce Wilbur Ross. "Throughout hurricane season, dedicated NOAA staff will remain on alert for any danger to American lives and communities."

Polk County has designated 47 official shelters countywide – only one in Lake Wales – at Spook Hill Elementary, 321 Dr. J. A. Wiltshire Ave. E. The county will operate a Citizen Information Line at 863-401-2234 or toll free 1-800-866-0228. They ask that no one go to a shelter without first confirming that it is open and operating.

The one-week sales tax holiday covers a variety of hurricane-related supplies, but with restrictions. According to the Florida Department of Revenue, sales tax will be exempt from May 31 to June 6 on the following: $10 or less – reusable ice packs; $20 or less – candles, flashlights, lanterns; $25 or less – gas or diesel fuel containers including LP gas and kerosene containers; $30 or less – AAA, AA, C-cell, D-cell, 6-volt and 9=volt batteries and nonelectrical coolers and ice chests for food storage; $50 or less – bungee cords, ground anchor systems, ratchet straps, tarpaulins, tie-down kits, flexible waterproof sheeting such as visqueen, plastic sheeting or plastic drop cloths, and battery, solar or hand-cranked radios including two-way and weather band; $750 or less – portable generators used to provide light or communications or to preserve food in the event of a power outage.

The Federal Emergency Management Agency (FEMA) recommends every home put together a hurricane preparedness kit that can be taken in the event of an evacuation or prove useful to those who stay in their home during a storm.

FEMA says preparing in advance can reduce potential stress: "One common trend seen when hurricanes are approaching is a wide-spread panic. When this happens, people rush in large numbers to get all the supplies they think they need. However, if you prepare your kit ahead of time, you can alleviate a lot of the potential stress of a very chaotic situation."

FEMA recommends the following be included in a supply kit:

o First-aid kit (include any prescription medication you may need)

"New satellite data and other upgrades to products and services from NOAA enable a more Weather-Ready Nation by providing the public and decision makers with the information needed to take action before, during, and after a hurricane," said Neil Jacobs, Ph.D., acting NOAA administrator. 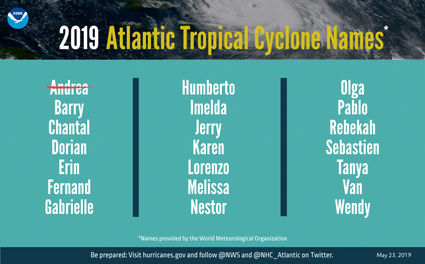 Subtropical storm Andrea formed May 21 and dissipated within one day.

NOAA's National Weather Service is making a planned upgrade to its Global Forecast System (GFS) flagship weather model – often called the American model – early in the 2019 hurricane season. This marks the first major upgrade to the dynamical core of the model in almost 40 years and will improve tropical cyclone track and intensity forecasts. "NOAA is driving towards a community-based development program for future weather and climate modeling to deliver the very best forecasts, by leveraging new investments in research and working with the weather enterprise," added Jacobs.

Also, this season, NOAA's Hurricane Hunter aircraft will collect higher-resolution data from upgraded onboard radar systems. These enhanced observations will be transmitted in near-real time to hurricane specialists at the National Hurricane Center, the Central Pacific Hurricane Center and forecasters at NWS Weather Forecast Offices.