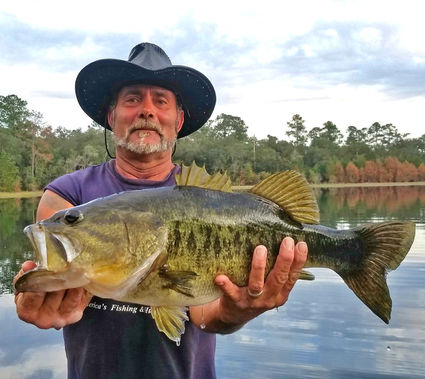 The Florida Fish and Wildlife Conservation Commission's (FWC) TrophyCatch program, now in Season 7, has awarded prizes for the catch and release of more than 9,000 largemouth bass since the program began in 2012. To date, 7,303 Lunker Club, 1,751 Trophy Club, and 66 Hall of Fame fish make up the milestone.

"We want to thank Bass Pro Shops and all of our partners and anglers for their continued commitment to the conservation of Florida's trophy bass fishery," said Jon Fury, FWC's director of the Division of Freshwater Fisheries Management. "The TrophyCatch program is a unique collaboration between anglers, partners and the FWC to ensure that future generations can experience the same thrill of a lifetime these anglers did when they reeled in their trophy bass."

Currently, the largest catch for the program is a 16 pound, 12 ounce bass from Lee County caught during Season 5 by Dominic Montalto on March 18, 2017.

The Season 6 Champion, Michael Donohue, received the TrophyCatch trophy for catching and releasing the heaviest bass of the season at 15 pounds,11 ounces, caught in O.L. Peacock Sr. Park in Port St. Lucie.

The TrophyCatch program rewards anglers who submit eligible catches and provide documentation of the catch and release of largemouth bass weighing 8 pounds or heavier in Florida. In order to be eligible for prizes, anglers are required to submit photos or videos of their catch to TrophyCatch.com, showing the entire fish and its weight on a scale, before releasing it back into the water. FWC biologists use TrophyCatch data for bass research, to make informed decisions about the management of Florida bass fisheries and to promote the catch and release of trophy bass. TrophyCatch is supported by many generous partners, such as Bass Pro Shops.

The FWC encourages anglers to join TrophyCatch to become citizen scientists and assist in the management and the conservation of Florida's freshwater fisheries. The associated TrophyCare program promotes best handling practices for trophy bass to ensure that each TrophyCatch bass is released alive. For more information about the TrophyCatch program, email John Cimbaro at [email protected]