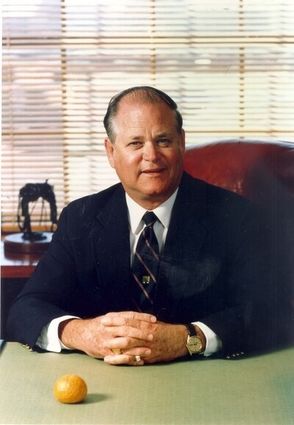 Ben Hill was born on March 3, 1942 in Lake Wales to Ben Hill Griffin, Jr. and L. Frances Griffin. He was a lifetime resident of Polk County.

He graduated from Frostproof High School in 1960, received his Associate of Arts degree from College of Central Florida in Ocala and attended the University of Florida in Gainesville. He also served with the Florida Army National Guard.

Ben Hill served as State Director of the Florida Citrus Showcase, and was a Director, University of Florida Board of Overseers for the Health Science Center. He also served on the Orange Bowl Committee, Miami, Florida.

He was a Past Trustee for the Board of Trustees of Winter Haven Hospital, Inc., and Past Trustee and Member of the First Presbyterian Church of Frostproof. He was Past President and Member of the Board of Seald-Sweet Growers, Inc. in Tampa; Florida Citrus Processors Association in Winter Haven; Florida Citrus Packers; Past Chairman & member of the Florida Citrus Commission; Florida Fruit & Vegetable Association; Citrus Associates of the New York Cotton Exchange; National Juice Products Association (Past Vice President); Executive Committee of the Florida Ag Council; Polk County Education Foundation; Florida Agriculture Museum; Shrine Member Egypt Temple in Tampa; CREW Trust (Corkscrew Regional Ecosystem Watershed); and Past Chairman – Polk County Zoning Board of Adjustment in Bartow.a

The Lee County Board of County Commissioners renamed Tree Line Blvd. to Ben Hill Griffin Parkway in appreciation of Ben Hill Griffin, III's leadership referencing the Florida Gulf Coast University site selection in November 15, 1997 in which he donated 1,000 acres to found the Florida Gulf Coast University. Also under his leadership, he directed Alico, Inc. to give $5 million to found the Alico Arena at FGCU – Gymnasium.

Marion Nelson Funeral Home will be in charge of the service.

Due to Coronavirus (Covid-19) guidelines, the funeral service will be private. Condolences can be posted and sent privately to the family through the online guestbook at http://www.marionnelson.com. A delayed recording of the service will be available at a later date for those wishing to watch and be a part of his celebration of life.