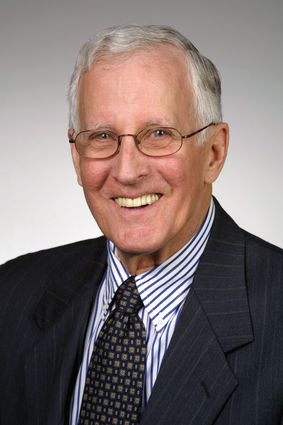 Dr. Rollie Tillman, Jr., died peacefully on Wednesday, Dec. 2, 2020 from complications due to COVID-19, surrounded by family in the hours before his death. He was an exceptional man, a loving husband, extraordinary father and grandfather, a mentor and friend to many, and a man of deep faith.

While he was a man of many accomplishments, both academic and civic, his finest contributions were those he made to his family. He showed us what it meant to be kind and generous and was a role model for patience. His deep love for his wife, our mom, was a testimony to us and those who knew them. Throughout his life, he shared his wisdom and love of learning and music with his children and grandchildren.

Born in Lake Wales, FL on April 11, 1933, to Rollie Tillman and Louise Johnson Tillman, he grew up among his family's orange groves in central Florida, graduating from Lake Wales High School in 1951. He was drum major in the high school marching band and his love for music continued his whole life.

Arriving in Chapel Hill as a freshman in the fall of 1951, he quickly fell in love with the school and the town, and knew that this was where he wanted to spend his adult life. During his college career he was a member of the Chi Phi fraternity, as well as a member of the Orders of The Old Well, The Golden Fleece, and The Grail, and the recipient of the John J. Parker, Jr. Medal for outstanding leadership in student government. He was also a drum major for the Marching Tar Heel band. His best accomplishment at Carolina, however, was winning the heart of Mary Windley Dunn, a beautiful co-ed from New Bern, whom he married in 1957.

After graduating from Carolina with a B.S. in Business Administration, Rollie went to Harvard Business School, receiving his M.B.A. in 1957 and his D.B.A. in 1962. He then returned to Chapel Hill to begin his long and varied career at his alma mater, which stretched from 1960 to 2003. During those years he was a professor in the School of Business, director of the M.B.A. and Executive Programs, vice chancellor for University Relations, and founding director and chairman of the Kenan Institute of Private Enterprise. He received the H. Allen Andrew Distinguished Professor of Entrepreneurship in 1999. Of all the hats he wore during his career, his greatest love was being in the classroom, teaching and mentoring students, many of whom continued to be a part of his life after leaving Carolina. He was gifted and compassionate and left his mark on those he met.

He was always active in community and civic affairs, giving back with time and talent. Outside of career and family, he found time to serve as director of the Chapel-Hill Chamber of Commerce, the Chapel Hill Preservation Society, Orange County Habitat for Humanity, the Food Bank of North Carolina, and the NC Museum of Art Foundation, to name a few. He was a trustee at St. Mary's College, from 1968-1978, serving as chairman of the board from 1973-1975. Rollie was a board member of the NC Museum of Art Society from 1988-1997, serving as chairman for two years.

Rollie was a faithful member of the Church of the Holy Family, joining in its early years. He served in many capacities there, including numerous terms on the vestry. His church family was always of utmost importance to him.

The family would like to thank the faithful caregivers at the Dubose Health Center for their loving care of Rollie in the past few years.

Because of Covid restrictions, the family will have a private service and hopes to have a celebration of life gathering at a later date.

In lieu of flowers, gifts may be made to the Church of the Holy Family, the Kenan Flagler Business School, or the Food Bank of Central and Eastern North Carolina.

Condolences may be shared at CremationSocietyNC.com