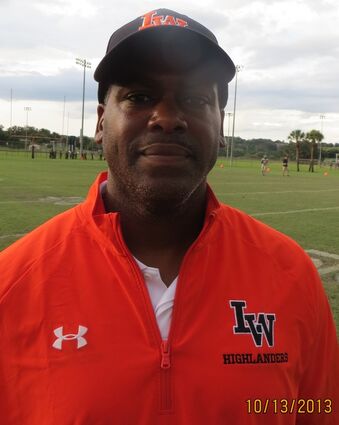 After losing a rain-soaked tilt against the 7-A regional powerhouse Lakeland Dreadnaughts the Lake Wales High School Highlander 11 are focusing on righting the ship when they host the Naples Lely Trojans September 24 at Legion Field following a bye week.

Like the Highlanders, the Trojans play in class 6-A, though a non-district foe. They sport a 1-1 record on the season thus far. The Highlanders will not face a District 7 opponent until they entertain Melbourne Eau Gallie on October 1.

The battle against the Dreadnaughts was part of Head Coach Tavares Johnson's plan to prepare the squad for an expected playoff berth by testing themselves against the strongest teams in the area. This is the Highlander's first year competing in the 6-A class.

"For one brief shining moment" commented one game observer, "it looked like the Highlanders might be the giant-killers." That moment came after the Dreadnaughts' first possession ended in a punt from near mid-field after a Sean Major sack of the Lakeland QB. On the Highlanders' first play from scrimmage Quarterback Trent Grotian gained 25 yards on a keeper before handing the ball to RB Marquish Seabon, who broke free and raced downfield for the game's first score. 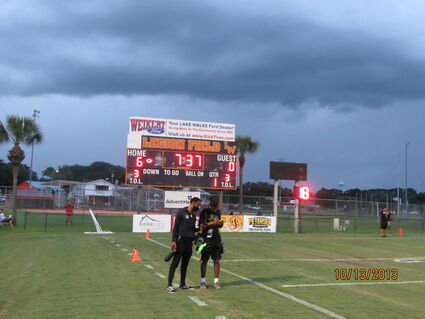 The rains came early during Friday's game against Lakeland

The 7-0 Highlander lead did not stand long despite a following Highlander recovery of a Lakeland fumble in the Lake Wales end zone that prevented an immediate answer. Two Highlander touchdowns came like bookends, but in between Lakeland racked up 41 points once the rain set in in earnest during the second quarter, leading to the final 41-14 score.

Lake Wales had previously topped regular-season opponent Davenport Ridge Community by a score of 55-16 and Clermont East Ridge by a final tally of 61-7. They also topped Winter Haven by a score of 35-0 in a pre-season kickoff classic game.